I’ve spent the past week and a half firing the small gas kiln at JD Jorgenson Pottery, in order to accomplish a couple things with the Nuka glaze.  At the St. Ben’s ceramics studio, I fired the glaze to cone 12 flat, almost cone 13 (about 2410 degrees F).  At these temperatures, it takes a long time and huge amount of energy to raise even a single degree.  It’s also harder on the kiln, shelves, and clay so it made a lot of sense to try and lower the temperature of the Nuka glaze before my new body of work.

The kiln at JD’s place was made from the shell of an old electric kiln that I salvaged from a high school in Sartell, MN.  They kept the electric box, so JD cut 2 small holes in the bottom of the soft brick to make burner ports.  Firing with gas instead of electricity will also let us test reduction firings very similarly to larger gas kilns.  These practice firings willhelp me for adapting to the Paramount Arts Center gas kiln, which I’m firing for the first time this Monday.  Fresh pots should be out by Art in Bayfront Park the next weekend in Duluth! 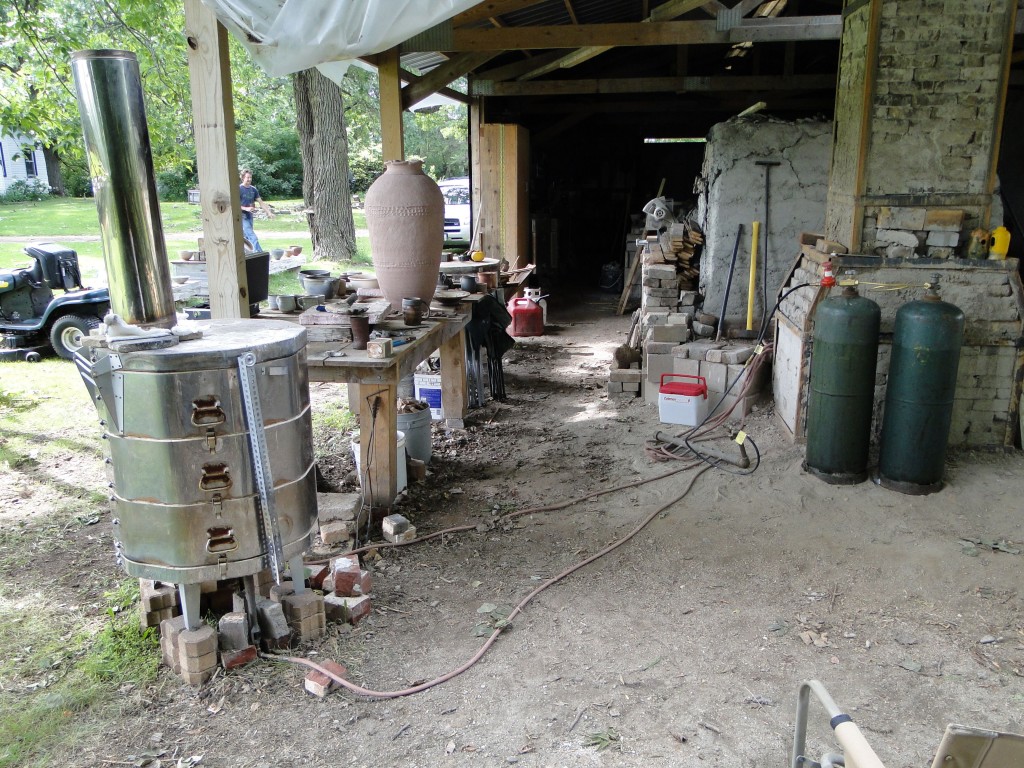 My first firing in this kiln was actually the second time JD fired it, and we got some really nice results.  The glaze fluxed out pretty well at cone 10 (that was our goal) but the bottom of the kiln only reached cone 9.  Also, even at cone 10 there were bubbles present in the glaze.  The Nuka contains wood ashes, which are high in alkali.  Something about the alkali cause bubbling in the glaze at high temperature, and the finished pottery had sharp holes and pits.  Problems like this are common when working with earthen materials, but the struggle is well worth the rustic tones and philosophies behind working from a waste stream system.

Here’s a few finished pots from the 2nd kiln firing, as well as some underfired ones.  The pieces on top are almost perfect, except for the bubbling where the glaze pooled. 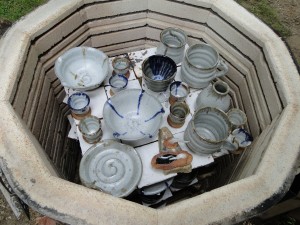 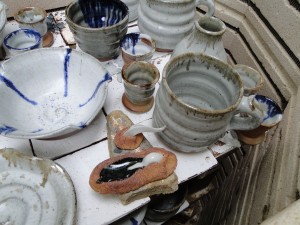 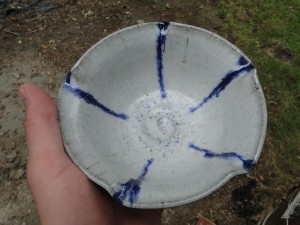 JD and I learned a lot from these pots, but with a 22 hour firing into the night I wasted a lot of time and energy with the stalled out kiln.  The barometric pressure changes every night, and this generally makes it difficult to gain temperature.  Once the sun went down, we were at the mercy of the kiln to go at it’s own pace.  Night firing makes for some cool pictures, but a miserable next morning. 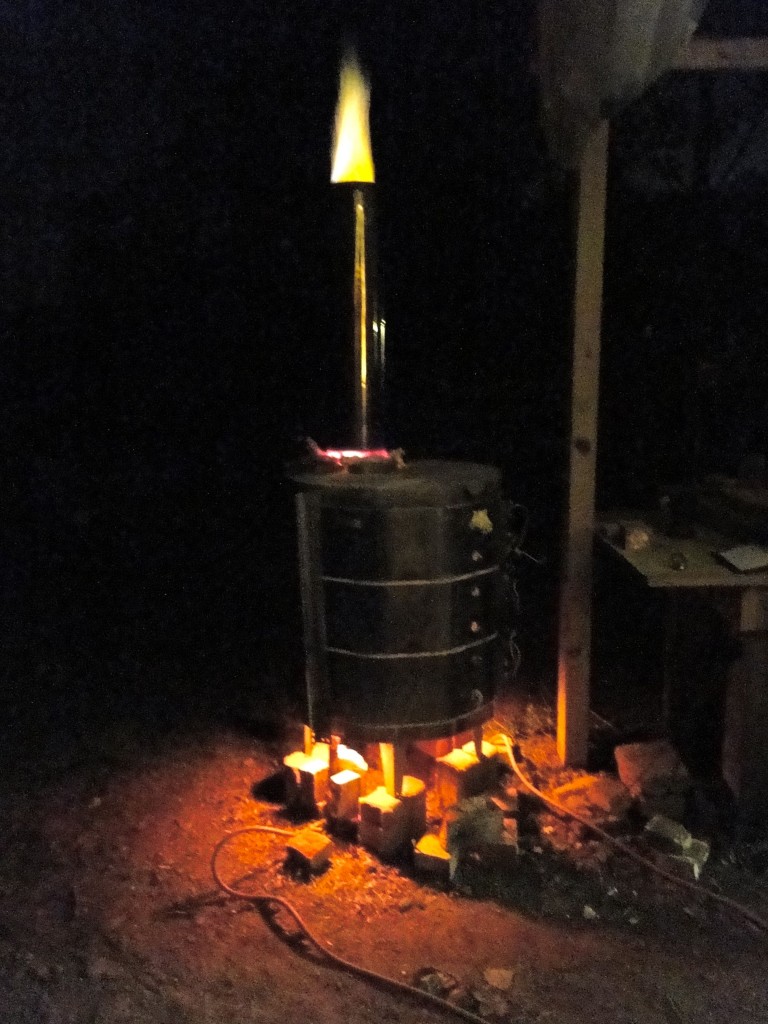 Right now I’m in the middle of the 3rd firing and the kiln is at cone 5 (almost 2200 degrees F).  Once it gets to cone 10, I plan to soak for at least 2 hours, so the bubbles will pop and the glaze will seal over.  At 6 hours in, we’re really close to peak temp and the soak period so things are looking good…definitely better than another firing into the weee hours of the morning uuhg…and hopefully the pots will turn out looking close to this good! 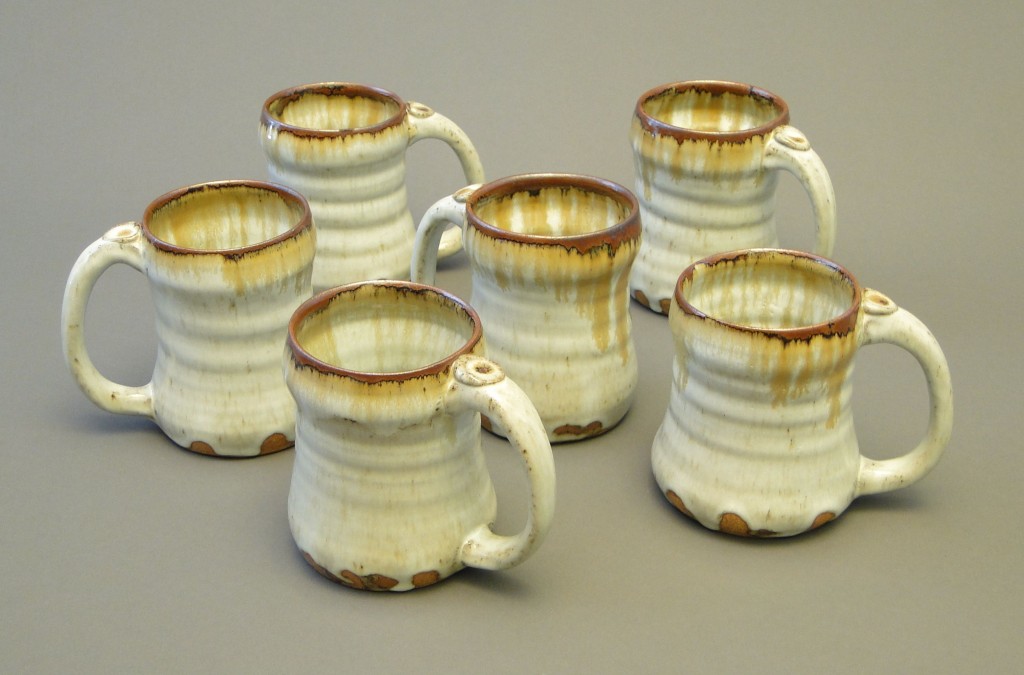