My interest in something I like to call rustic pottery began in high school, after my first visit to the St. John’s Pottery. I was impressed by the idea of harvesting pottery materials directly from nature, but even more blown away by the colors and surfaces achieved by Richard Bresnahan and his apprentices. I bought the book Body of Clay, Soul of Fire and it sat across from my pottery wheel for the rest of my senior year.  Richard’s pottery was glazed naturally by wood ashes and flame that floated through the 87 foot long kiln, painting the pottery over the course of a 10 day wood firing. He learned these techniques during his apprenticeship in Karatsu, Japan. I tried to replicate his glazes and surfaces in our small electric kiln at Xavier High School and this made for some bright colors, but I was thirsty for the juicy wood fired surfaces.

I finally got to experience the use of natural materials during my freshman and sophomore years at CSB/SJU, interning at JD Jorgenson Pottery.  JD, a former apprentice at the St. John’s Pottery, taught me how to use natural clays in both pottery and kiln building.  We built a 3 chamber wood-kiln over 30 feet long and fired thousands of pots in over a dozen firings.  JD’s kiln produced a huge variety of wood-fired surfaces, so I busted out as many little cups as I could to put them in every nook and cranny of the kiln.  Most pottery was loaded as just raw clay, and each firing taught me more about how flame and wood ashes paint the clay surface. 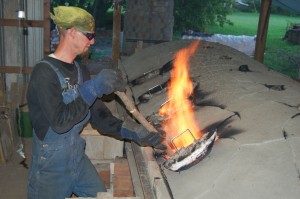 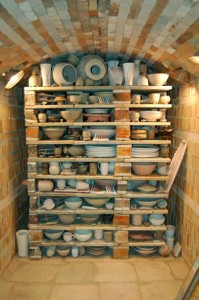 Even my advisor and ceramics professor, Sam Johnson, was interested in wood firing during his 4 years of my undergrad that he spent firing mostly in gas kilns.  Sam built a wood kiln at the University of Minnesota Morris, which fired he his work in occasionally; however, his gas fired pottery (he called it his “whiteware”) was meant to be shown with his dark, wood fired surfaces. Sam’s process really motivated my interest in gas firing, and his critiques of my glazeware helped me find parallels with my wood fired work. 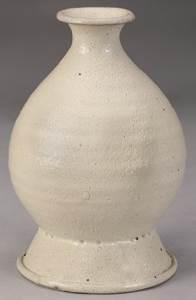 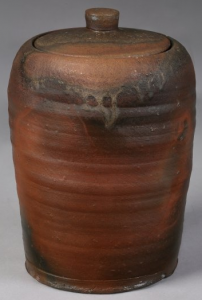 The wood fired surface continued to influence my pottery for the remainder of college and shows up in my current work. Even with glazed pottery that’s fired in an electric or gas kiln, I look for glazes with rustic colors, surface qualities, and variation that occurs during the firing.  Copper Red glazes provide deep, intense color that reminded me of the bright colors and asymmetrical patterns that Richard achieves on his pottery. The Nuka glaze utilizes local wood ash as the main glaze ingredient, and the ashes make for juicy surfaces with rustic tones.  I brush iron onto the glaze, which drips during the firing as gold and brown streaks as it reacts with the wood ashes at 2500 degrees F. 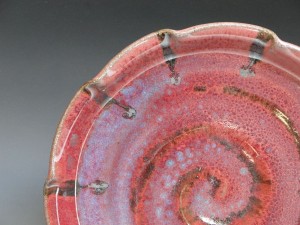 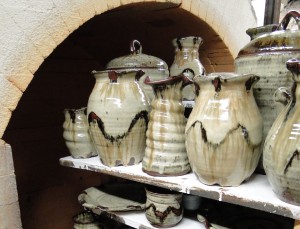 I’m still amazed how elemental pottery can be: water, clay, wood, and fire are used to make tableware for everyday use, and the earthen materials create a rustic, earthen aesthetic.  Wood firing taught me to give up some control and let the process speak.  The pottery you eat and drink from at the Local Blend is fired in a gas or electric kiln, but it’s influence by the wood fired process and surface.