“The challenge is to do the thing you have to do because you’re in love with it and can’t do anything else. Not because you want to become rich or famous but because you will be unhappy if you can’t do it.” 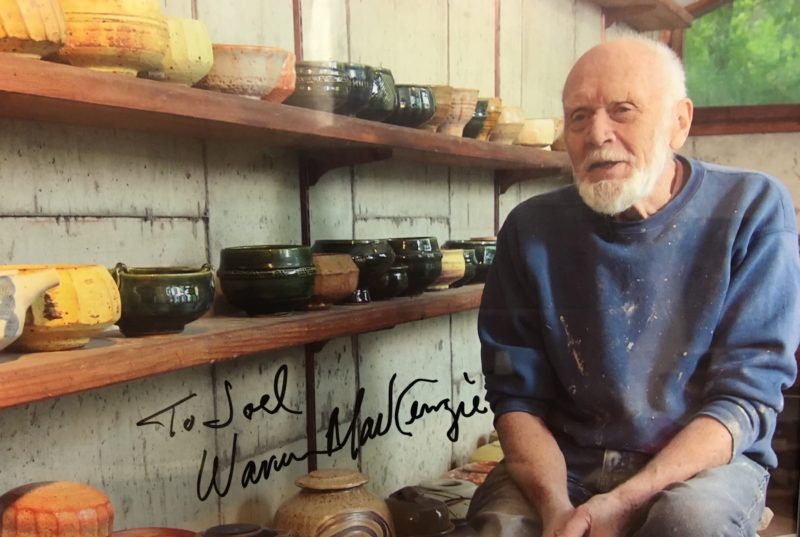 There are far easier ways to grow a business than by selling pottery, but few are more satisfying. Potters use their bare hands to craft gorgeous vessels that are only finished after literally surviving a trial by fire.

Making a living as a potter means letting people eat and drink from your gorgeous art, while respectfully receiving currency for your creations. It’s an incredibly fulfilling way to live in our globalized society.

“Plenty of people can make great work. Not everyone has the dedication to make it, and to make it work. ~ Ryan Holiday, Perennial Seller

Here is a list of 5 potters from different parts of the planet who are especially skilled in the art of pottery business.

Potter Tama Smith and her husband Jerry craft and sell pottery with gorgeous, abstract glazes inspired by the North Dakota landscape. Millions of people drive by on I-94 every summer, see their pottery billboards and stop to buy pots on the way to and from the Rocky Mountains.

“Any potter can make cups and bowls. Your surfaces will set you apart.”

20+ years of potting full-time in the North Dakota Prairie draws people in to hear their story and buy pots, including me. Their business was so captivating that I even worked out there for a spell.

Learn more about Prairie Fire Pottery in this American Craft Council authorship, “A Potter’s Journey, Part Six: Growing A Profitable Pottery Business” or from blog posts I wrote during my two week stint working as a production potter in their studio:

Looking Back on my Pottery Trip to Prairie Fire Pottery, Beach, ND

Shiho San (Mr. Shiho) has lived in the small town of Shigaraki, Japan for his entire life. He welcomed me into his studio last year to sit cross legged, sip espresso and hear stories of his rise to the top of Japanese Tea Ceremony prestige. We browsed his personal gallery, held $5,000 tea bowls and touched a $70k vase.

Devotion to natural materials (digging clay from his backyard, using traditional Korean kick-wheels, firing with only wood for 10 days straight) forced him to endure years of strife in his early career. Shiho San caught a break by selling tea bowls from the trunk of his car to a generous, influential Buddhist monk.

Tokyo skyscraper galleries were vying for his art within a few years. Over the decades, his art would grace the some of the most prestigious galleries atop the tallest skyscrapers in Tokyo.

Visit this Northern Minnesota studio anytime year round and you can buy a pot from an outdoor shelf. Simply leave $30 in his money jar and be on your way.

What do the vastly different prices say about the quality of their curiously similar art? Absolutely nothing.

Both potters mastered their craft, then worked for decades to create symbiotic relationships with their communities. Both charge and receive what they need in order to thrive.

Dick’s rural studio has been planted near Lake Superior for 30 years. The kiln, studio and his home feel native to the land, like they sprouted up with the trees. This fall, my girlfriend and I were lucky to experience and film a kiln unloading, which happens only four days per year:

Lucky to experience a kiln unloading at Cooter pottery, a rural studio that has been planted near Lake Superior for 30 years. He unloads this kiln only four days per year. We were lucky to arrive during a kiln unloading, while spending time at Lake Superior on vacation from my pottery studio.

Tomoo Hamada is a third generation potter, grandson of famous potter Shoji Hamada, who was a Japanese National Living Treasure. Tomoo and his father Shinsaku Hamada live and work in Mashiko, Japan.

Hamada Pottery is set up as a museum with a calm, self guided tour of the gorgeous grounds. The tour ends with a pottery gallery. After buying three small plates, Tomoo welcomed us into his studio for tea and a pottery trimming demo.

Hamada Pottery also uses tech savvy means of connecting with people. Tomoo friended me on Facebook and showed me video from his wood-firing on his smartphone, while standing next to a kiln that was still warm from a recent firing.

Ayumi Horie is an online pioneer potter. About 10 years ago, she launched an online store that has consistently, successful sold high-end coffee mugs to customers globally, almost instantly after posting her new pots.

She founded “Pots In Action” (potsinaction.com) in 2005, which uses crowd sourcing to help potters and ceramic artists connect with and educate the public about rich ceramic traditions.

Ayumi also helped organize “Handmade For Japan” (handmadeforjapan.org) which used art to raise over $100,000 for post-disaster relief during the 2011 earthquake and tsunami, giving the fund entirely to GlobalGiving’s Japan Earthquake and Tsunami relief fund.

Her efforts to organize online communities around pottery give people deeper reasons for supporting her body of work and pottery catalog. Other potters have referred to her as the “Queen of Social Media” and it shows in her high quality videos that help people relate to her pots through making food:

Making ramen and making pots. The 1st of 5 clips from my new ramen video. Stay tuned for the next four! Edited at Haystack Mountain School of Crafts, music by Lullatone. Online sale coming up Nov 1.

Thanks so much for reading this far. Please feel free to enter this giveaway, inspired by some of the most notable pottery of the Cherrico Pottery business: Cosmic Mugs and Guinness World Records pottery, as well as 3 copies of one of Joel Cherrico’s favorite business books: Perennial Seller by Ryan Holiday

Bonus Entries: What is your favorite business or organization and why?

ENDED: Thanks for participating everyone! 3 anonymous winners were chosen and we emailed them for their free pottery and books. Plus, we even chose one more person from the comments to win another bonus Cosmic Mug. Congrats, Kristin!

75 Replies to “5 Potters Who Embody The Art of Business”