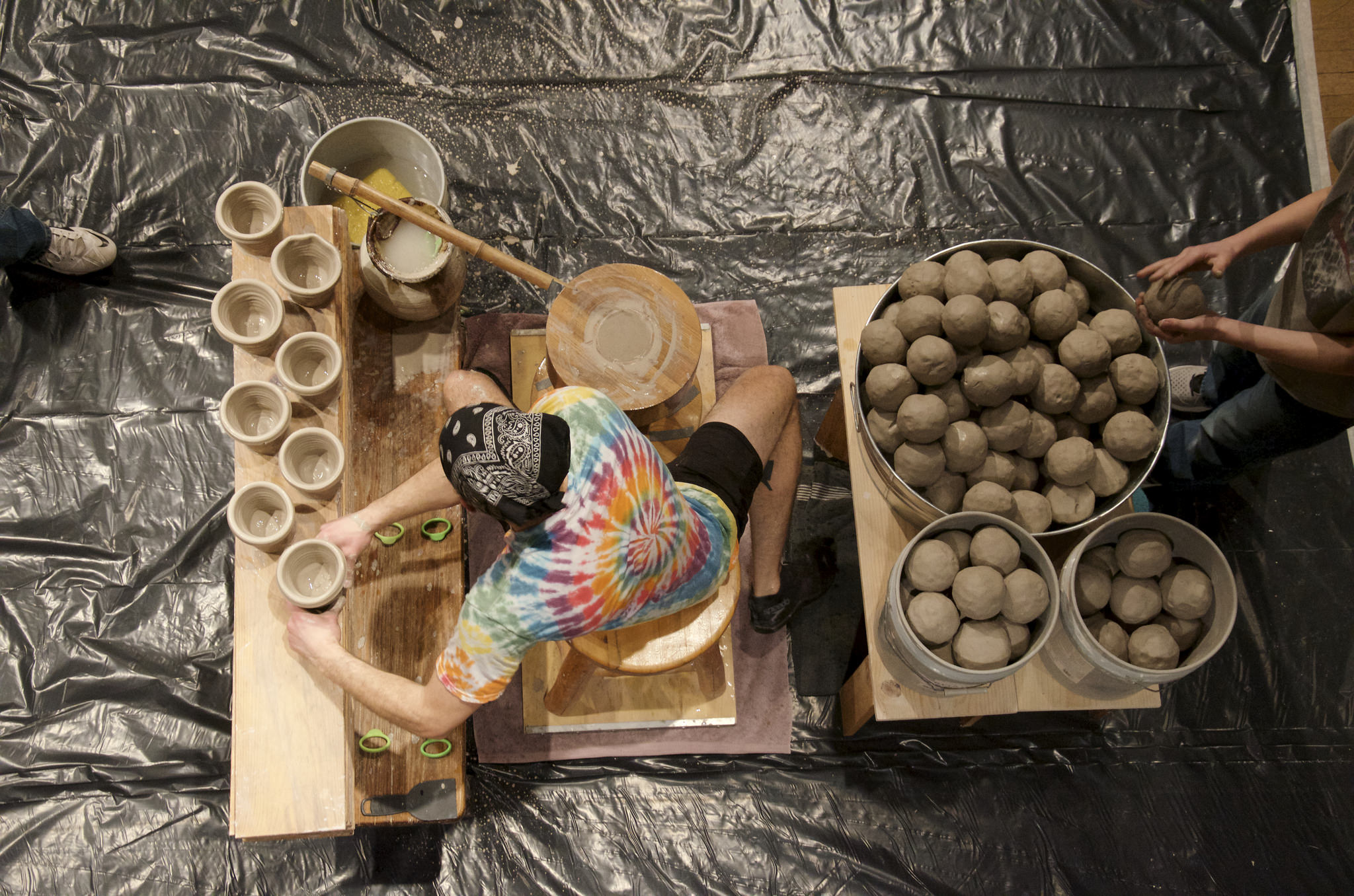 Back in February, 2015, I read “The Obstacle Is The Way” just before setting the new pottery Guinness World Records™ title for ‘most pots thrown in one how by an individual, which you can watch in this Facebook video. This story tells how I trained my body and mind to achieve the feat. 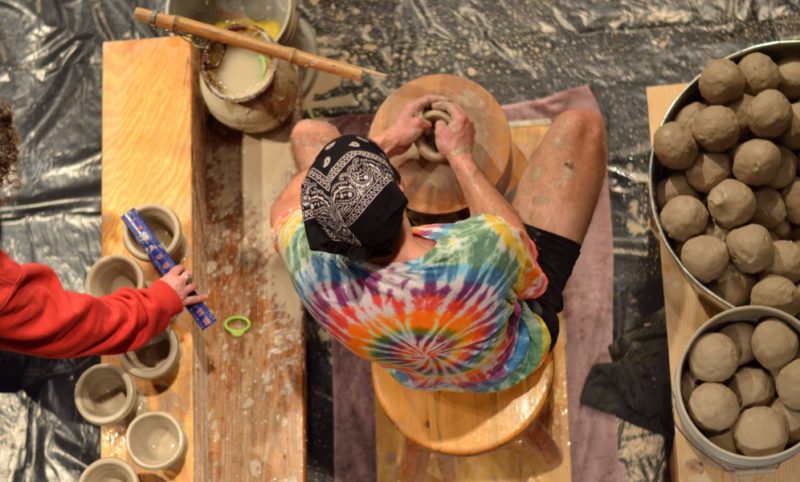 Thousands of people watch my Facebook throwing demos and typically say things like this. I really appreciate the sentiment. Unfortunately, they can’t feel how pottery making is actually really tough. Ridiculously tough.

Yes it’s hard because it requires a lot of skill, but it’s also hard on your body. Hands, arms, back and leg muscles are tight. Slouching posture feels natural, but must be corrected to avoid back injuries. Intense concentration keeps pots flowing off the kick wheel, but the slightest error ruins the entire pot. Even when I get into a meditative rhythm after 10-20 pots, my mind instantly begins wandering, requiring even more intense concentration.

All of those stresses were amplified during the world record attempt, even causing me to throw out my back during practice.

Let’s back up a bit. For one full year, I practiced for the Guinness World Records title for ‘most pots thrown in one hour by an individual’ by creating over 1,000 of the required “planters” for the record attempt. Slowly and methodically these pots came off the wheel over many months of practice, on top of another 3,500+ pots that I needed to create and sell to make a living. Three weeks before the record attempt, I quickened pace, training like I was going to run a marathon.

Training began the day after returning from Japan. Tokyo, Kyoto and Mount Fuji were incredibly inspiring. Happily back to work in my pottery studio in Minnesota, I began training at full speed. The previous record holder from the UK beat the record on an electric wheel, but I planned to use my traditional, Japanese kick wheel. With no motor, you can’t just crank the engine and move your hands. It requires your full body.

“Awesome!” I thought. “It will look so cool breaking the record with a kick wheel. Let’s do this!”

I prepared 100 pounds of clay, sat down at the wheel and immediately, painfully threw my back out. 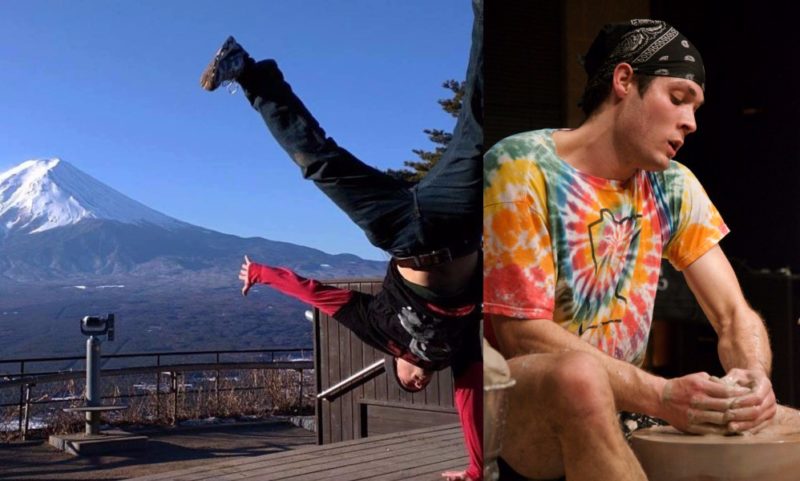 Handstands at Mount Fuji might have boosted my ego a bit. This was the second time I threw out my back from throwing too much pottery too quickly. Last year, I was in bed for two days straight and couldn’t make pots for a week. Fortunately, this time the lower back tweak was minor.

Two days later, I returned to training more carefully. 350+ pounds of clay were required for the record attempt and I couldn’t even throw one third of that. No more screwing around. 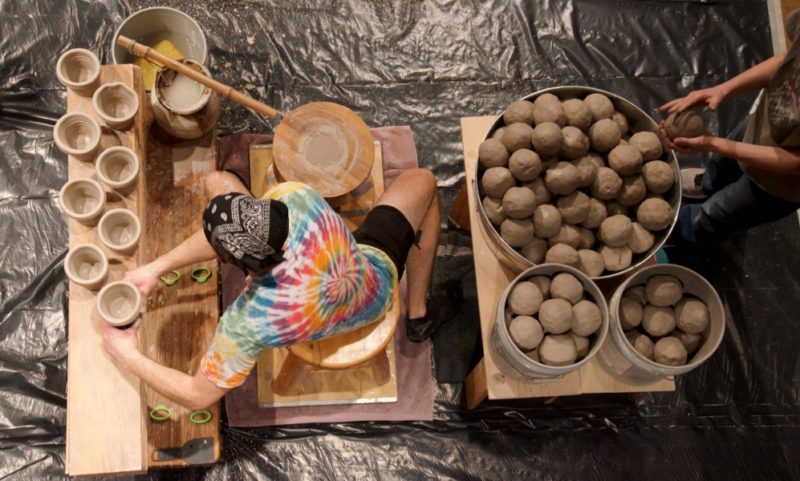 21 days after returning from Japan, I set a new Guinness World Records title for ‘most pots thrown in one hour by an individual.‘ Here was my daily regime during that three week training period:

The mental strain was stifling:

During his TED Talk video, Andy Puddicombe’s juggling and public speaking skills make the benefits of meditation self evident.

The Obstacle Is The Way was a “quake book” for me. Streaming it on Audible three times in three weeks helped me optimistically explore every possible way to conquer the record.

150 pots in one hour was the record to beat. One day before the attempt, I set up a stopwatch and threw 48 pots in 19 minutes. Do the math and you get one pot every 23.75 seconds. Beating the record required one pot every 24 seconds. I was barely scraping by and had to triple the throwing time.  Those margins were too close for comfort.

“When America first sent astronauts into space, they trained them in one skill more than any other: the art of not panicking.”

When I sat down to attempt the record, I had no idea whether or not I could beat it. Eight volunteers needed directions, 30 people were patiently staring at me and the 375 pounds of clay was sitting next to me, beginning to dry.

A stroke of good fortune hit. Someone randomly put on my all time favorite album: “Stadium Arcadium” by the Red Hot Chili Peppers blasted through the loud speakers.

The clock started. I wasn’t worried. I got into a rhythm and the flow started. For the next hour, the benefits of meditation were obvious. It was easy to ignore the huge influx of distracting sounds, questions, gaze of the crowd and bullshit doubts in my own mind. I found myself singing along to the Chili Peppers tunes. The rest is history.