For years, thousands of people have regularly watched me handcraft pottery in live videos. I’m honored they find my art fascinating. But whenever I share an opinion unrelated to pottery, that doesn’t perfectly align with their worldview, people get upset.

It’s the same problem every artist, company, and public figure must face when they share anything outside of their usually scheduled programming. The dreaded, “Stay out of politics!”

That’s one of the biggest lies in society today: that we all need to agree on everything all the time. And if we don’t agree, then we need to somehow cut those people out of our lives.

Art is a search for truth. I’m an artist, so I never shy away from tough topics. But as we learned in “The Social Dilemma,” social media companies profit when we argue. That’s why it’s our duty to be compassionate and open minded on our search for truth, especially when we don’t agree.

Why is there Racism in Minnesota?

Until recently, Minnesota wasn’t a place I really ever thought of as having racial problems. It’s in the northern United States, which fought against slavery in the Civil War. We even have the reputation of being “Minnesota Nice.”

But in the past 2 years, the New York Times published two articles about dealing with racial problems in Minnesota, both just a few miles from my pottery studio:

We live about an hour north of where George Floyd was murdered in May 2020, shocking the world.

For years, I’ve made it a priority to donate thousands of dollars of pottery revenue to non-profit charity causes I believe in. With that in mind, I decided to make art about fighting racism, as my first NFT.

NFTs are basically just new ways technology lets us make art. If you don’t understand what NFTs are, and why they’re important, you can learn more in this helpful Forbes article.

If my NFT sells, 100% of the primary sale will be donated to an organization that worked for racial equality alongside Martin Luther King, and who I believe still does good work fighting racism today: the NAACP. And if it doesn’t sell, it will still raise awareness about an important problem: the scientific consensus that shows how black people today are more likely to be killed by police than white people. 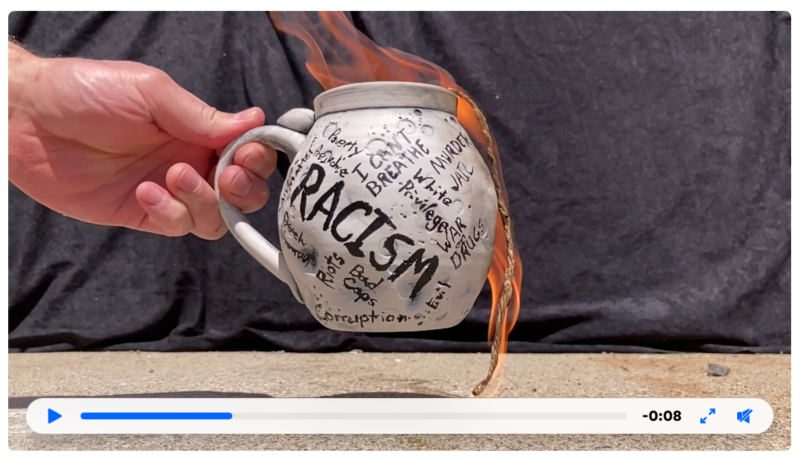 After I made this art, people were outraged. They said:

“Systemic racism does not exist.”

At first, I felt embarrassed. Maybe they’re right. Am I making a mountain from a molehill? I want my art to help people, not upset people. Maybe racism isn’t actually that bad.

That feeling didn’t last long. A month after I published my art, a white man was arrested just a few miles from my pottery studio. He crashed a stolen car into the house of a black family, after months spent harassing them for being black. 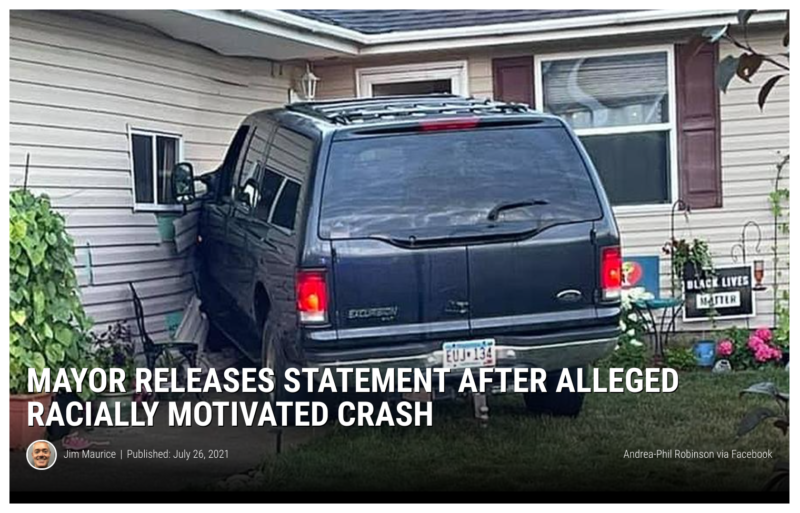 The Difference Between Racism and Systemic Racism

A few weeks ago, I was vacationing on the east coast. I met a kid named Dave (not his real name) while lifting in a hotel weight room.

Dave walked in wearing jeans and a winter coat. He went straight to the big, pulley machine and proceeded to do one of those ridiculous lifts that instantly tells you this kid had no idea what he was doing.

Dave was all talk. He struck up a conversation with a girl doing sit ups. I was eavesdropping from the elliptical. The room was small, it was just us three.

I looked at Dave and said, “Damn man you’ve got some crazy stories!”

Dave looked at me with shy confidence. I asked him to come try free weights. He grabbed two 20lb. dumbbells and sat on the padded bench. I walked him through 10 reps, showing him how to touch his chest with the edge of each weight, then clink them together at the top.

“Yea he kind of does, they’ve got the same jawline.”

“No he’s definitely alive,” I said. “He’s a businessman, worth about $100M. He grew up in a tough neighborhood, got shot 9 times, went to jail. But he read a lot of books. Now he’s a millionaire. You should read his book, The 50th Law by Robert Greene. You’ll love it.”

Fight Racism Through Empathy, Not Argument

Systemic racism is when people suffer from systems, like redlining, a racist housing practice that was common for most of the 20th century. Black people were denied equal housing rights, causing poverty and crime. Of course redlining is illegal now, but future generations are still dealing with the long-term consequences.

I’m not condoning what Dave and George Floyd did. Floyd was a crook, in and out of jail, from problems of his own making. And Dave needs to realize that his bad actions, even as a 15 year old kid, will lead to severe consequences.

But it’s also true that Floyd and Dave are victims. Yes, it’s possible to be both a criminal and a victim. Baltimore, Minneapolis, and how many other cities are still racially divided?

We’ve made massive steps in the United States to fight systemic racism, far more than most countries. But we need to stop pretending that we’re finished.

Helping one cause doesn’t take away from another. You have to support all ideas that are worth solving, and approach all of them with empathy.

How to Reduce Systemic Racism Immediately

Most inner city slums in the US are mostly black communities today, hurting the descendants of enslaved African Americans. Reparations could come in many forms: housing, college level education, land, cash, or a revenue stream. None will be a perfect solution, but we should tests these options. Legislation on reparations is overdue.

Legalize and Tax Cannabis Just Like Alcohol and Tobacco

End the hypocritical stupidity putting people in jail for using a medicinal plant that is far safer than alcohol and tobacco. Alcohol kills millions of people every year.  Cannabis science has insufficient evidence of even a single death from overdose. Legalize it, regulate it for safety, and tax it.

This is a racial issue because black communities have been statistically jailed higher than other races, especially for non-violent crimes. They should get a profit share of cannabis tax revenue as part of reparations, like Native Americans get casino revenue.

A good system for judging whether or not to celebrate someone from the past is if they were good in their time, judged by the standards of their day, not just ours.

George Washington was a farmer who owned slaves, but he made the rare choice to free them, and spoke often about his desire to end slavery. He knew the topic of slavery would tear our fledgling country apart, foreseeing the Civil War before almost anyone. That’s why Washington’s ideas are worth celebrating, and his statues worth honoring, even today.

Columbus was an explorer, and exploration should be celebrated. That’s why we donate to the Planetary Society every month, and their mission to encourage space exploration. We should honor the deep, human need to explore. But Columbus was also a ruthless conqueror who tortured people for not bending to his will. We should celebrate exploration, not conquest.

Today there is a movement to replace Columbus Day with Indigenous Peoples’ Day. This is a good mission. It’s true that most indigenous people were just as violent as Columbus, even amongst their own tribes and cities.  But it’s better to celebrate people who fought in defense of their culture, who stood up to conquerers.

History is full of ideas more worthy of celebrating than Columbus.

For example, the 300 Spartans, who fought and died 2501 years ago at the Battle of Thermopylae. The Spartans were far from perfect. But they’re remembered for fighting against conquerors, sacrificing everything to defend the idea of freedom in the face of tyranny.

That’s why I make pottery to honor these ancient Spartan Warriors, in collaboration with world renowned author Steven Pressfield.

Some people think businesses should stay out of politics to make customers happy. They’re not wrong, it makes good business sense. You’ll probably make a lot more money that way.

When I designed a “Cosmic Mug” style Factory Made in China, the mugs helped us generate the highest monthly revenue in my company history. Affordable and beautiful. Win-win, right? 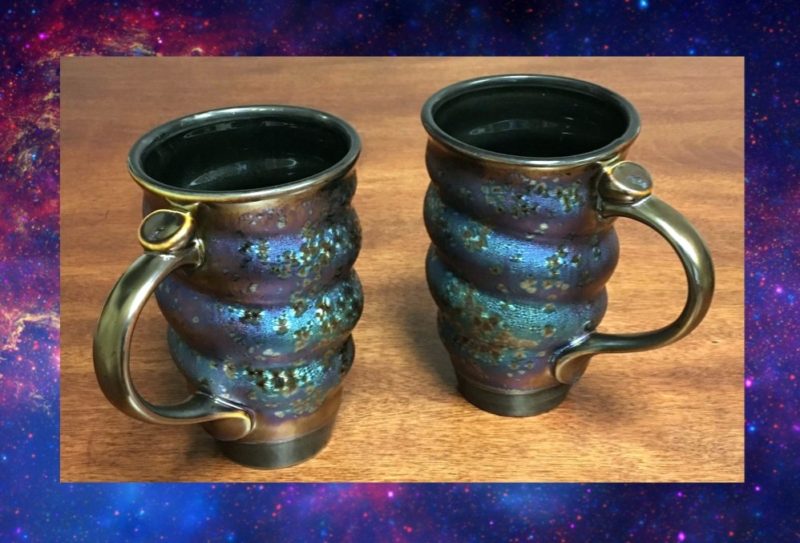 Not exactly. Even though this project was profitable, I ended it. I don’t want to participate in growing a system of factory workers doing hard, manual labor, when I believe it’s better to make art.

My decision was also related to fighting racism. That’s why I donated to the Uyghur Human Rights Project to assist with Uyghur people who are being oppressed by the Chinese government, as evidence from BBC reports. More remarkable evidence comes in this heartfelt podcast interview on Daily Stoic with Uyghur Refuge Ferkat Jawdat. The story of his trapped, tortured mother was enough to encourage me to donate to their worthy cause.

Art Should Be An Act Of Courage

The pot below was made by David Drake, aka “Dave the Potter,” an enslaved potter in the 1800s in South Carolina. Legend tells how Dave lost a leg because his owner beat him for inscribing his pottery with poetry. 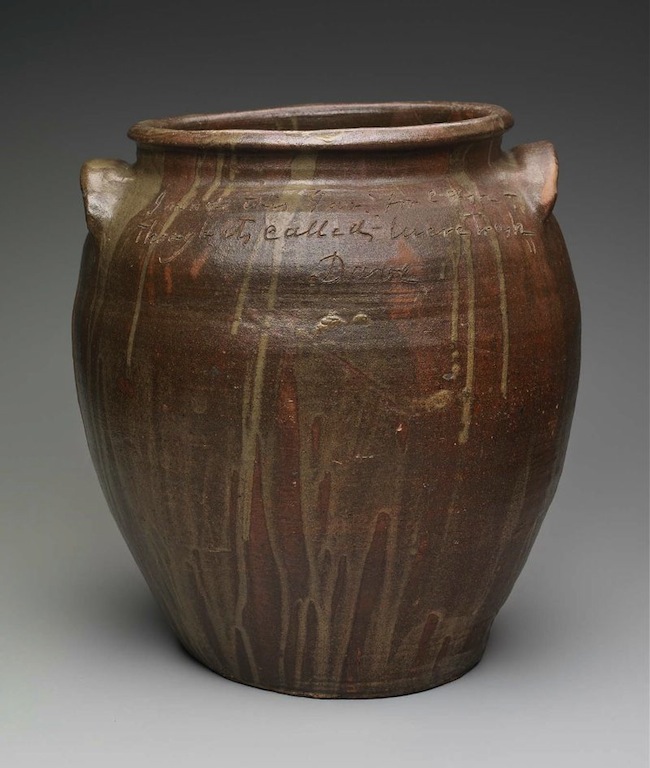 “I made this jar for cash, though it is called lucre trash. – Dave”

As an enslaved person, Dave surely knew that any act of expression could have dire consequences. Imagine being so oppressed that writing a poem costs you your leg. He did it anyway. That’s why Dave’s craft embodies true courage.

I believe we should honor good ideas, and people who made worthy sacrifices. George Floyd may not have chosen to be a martyr, but his sacrifice is worth honoring because it represents bigger problems that we all have a duty to solve.

Politics will never be the main focus of my art. But I’ll never shy away from sharing ideas that I believe make the world better. 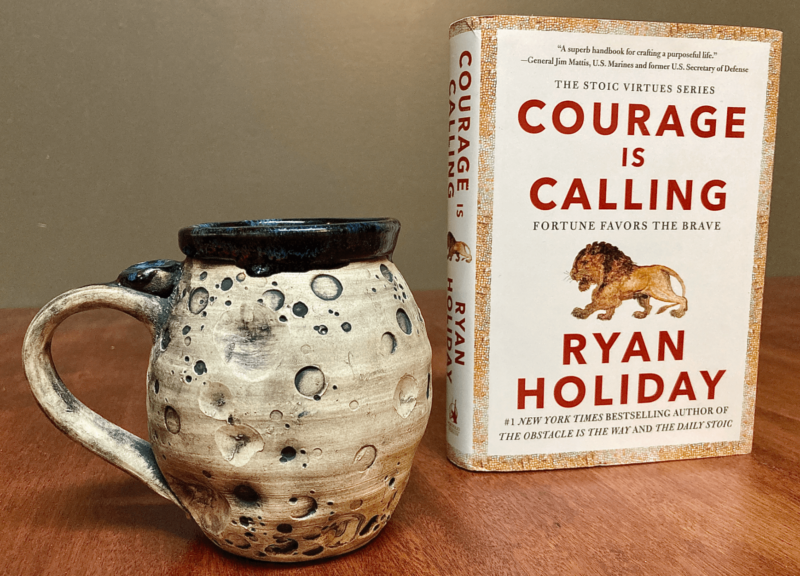 What’s a better combo than a great book and mug? Start your day with one of our most popular, valuable coffee mug styles by Cherrico Pottery. Enjoy your morning coffee over a new book by New York Times bestselling author Ryan Holiday. One lucky winner will get: 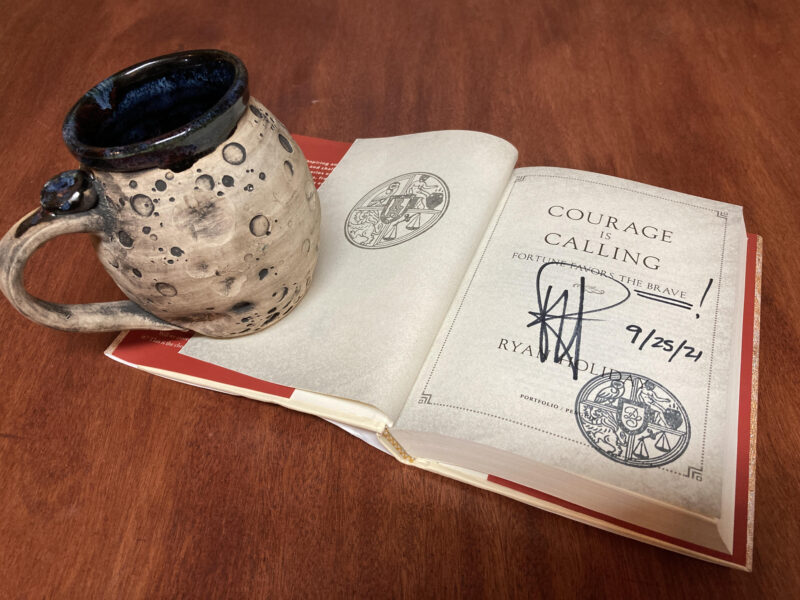 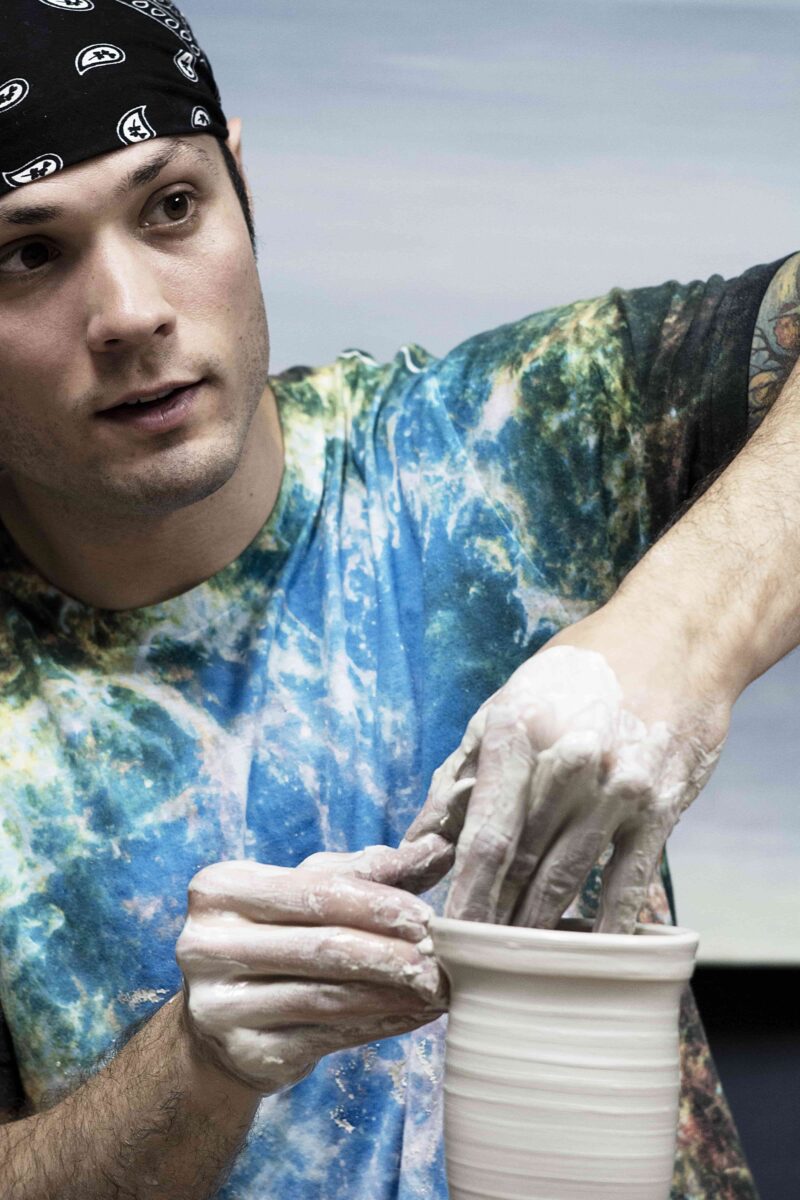