This is a guest blog post written by Megan Schroeder,  student worker at Cherrico Pottery from 2017-2019 during her undergraduate studies at the College of St. Benedict/St. John’s University. This post is a reflection of her time at Cherrico Pottery, written after her college graduation. Enter Megan:

This story is important for anyone who doesn’t see themselves as an “artist” but loves art.

It’s also important because Joel and Sienna Cherrico are doing incredible things beyond just making art. They’re great at knowledge work: trying to educate their audience, workers and everyone they come in contact with. Cherrico Pottery encourages people to come up with their own original ideas.

Being part of an artistic process in a professional business is unique. I was surrounded by art in daily life, but I could see the real impact happening in the lives of others– specifically, pottery customers and fans.

The blog post shares what I think are the most important lessons that Cherrico Pottery offers people, and how to create things that are truly original.

It all starts how and why Joel decided to start a pottery company.

Joel Cherrico started at The College of Saint Benedict/Saint John’s University studying Biology/Pre-Medicine in 2006. But after freshman year, he decided that he would rather try and figure out how to make a living as a full-time potter, and changed his major to Art.

He worked two years of unpaid internships at JD Jorgenson Pottery. According to Joel, this is what taught him first hand about the hard work, dedication and love involved in building a pottery studio. They built a 30ft ft. long wood kiln, filed it with pots and fired it.

Joel also worked at the college Ceramics Studio all four years, which gave him more experience with the technical aspects of ceramics, while supervising and teaching other students. Samuel Johnson was his college professor and a key mentor who guided Joel during this job.

Three months of working in the St. John’s Woodshop, also gave Joel woodworking experience, and wood to build pottery shelving that he still uses today (our “Pottery Office” cubicles are made from shelves Joel built). The first Cherrico Pottery sales came from filling those shelves with pots for sale in front of the student bus stop in 2009. 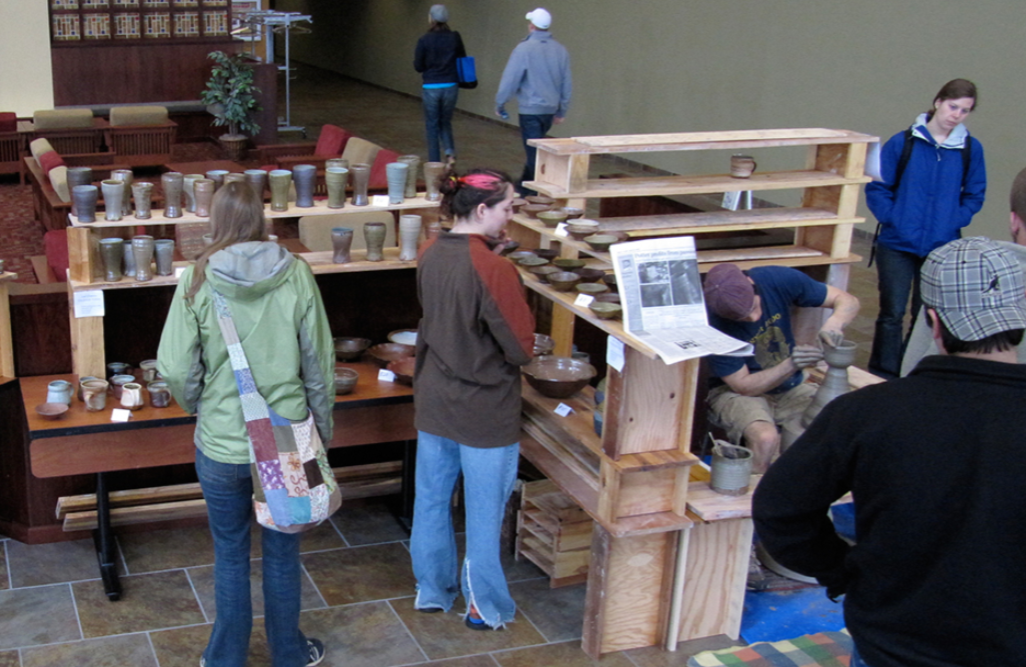 From College Student to Professional Potter

In 2014, the American Craft Council and Joel worked to create a web exclusive blog series called, “A Potter’s Journey.” This story reveals insights about how he developed a plan to become a full-time potter and small business owner during college, and then launched and built his passion into a profitable business.

What I find so interesting is that his art is serving people. Joel isn’t afraid to put himself into the public eye, like when he was interviewed by Guinness World Records. But what’s really important is that he found lessons that are worth sharing in a professional outlet like the American Craft Council.

My College Experience: Working in the Pottery Office

I started off knowing absolutely nothing about pottery or business. But in running a small business, you learn to do it all. We helped with writing, photography, packing and shipping, customer service, marketing, operations, and even figuring out how to sell pottery myself.

Our job was to keep Joel on the pottery wheel, and away from office work.

Basically, we had the freedom to do anything that got pottery into the hands of people anywhere on the planet.

Being at Cherrico Pottery felt like a privilege. Joel is smart and has audacious goals that he is constantly thinking about. One of my favorite things about interning for Cherrico Pottery is that Joel lets us read during our shifts.

Yes, we got paid to read books. It was actually required!

Joel wants his workers to be constantly learning and thinking about new ideas and perspectives, but he can’t always be in the office (duh, he’s gotta be making pots!) so he leaves the teaching to his collection of office books, and our own work ethic.

I have taken lots of professional and personal advice from these books. My three favorites have been The Go-Giver by Bob Burg and John David Mann, The 4-Hour Workweek by Timothy Ferriss, and #GIRLBOSS by Sophia Amoruso.

“It had long since come to my attention that people of accomplishment rarely sat back and let things happen to them. They went out and happened to things.”

I graduated in the spring of 2019, and said my goodbyes to Cherrico Pottery, Sienna, and Joel. This goodbye was very hard. Cherrico Pottery was one of my very first internships and was the one most pivotal in my college experience.

I got to see my work actually do something and that’s one thing I have learned about working for a small business – you get to see your work make an impact in people’s lives all over the world.

Not only have I had the privilege to learn from both Joel and Sienna, but I have also got to work alongside other student workers; John, Lauren, and Jack. Joel and Sienna are not the only ones that have had an impact on me, but these three as well. 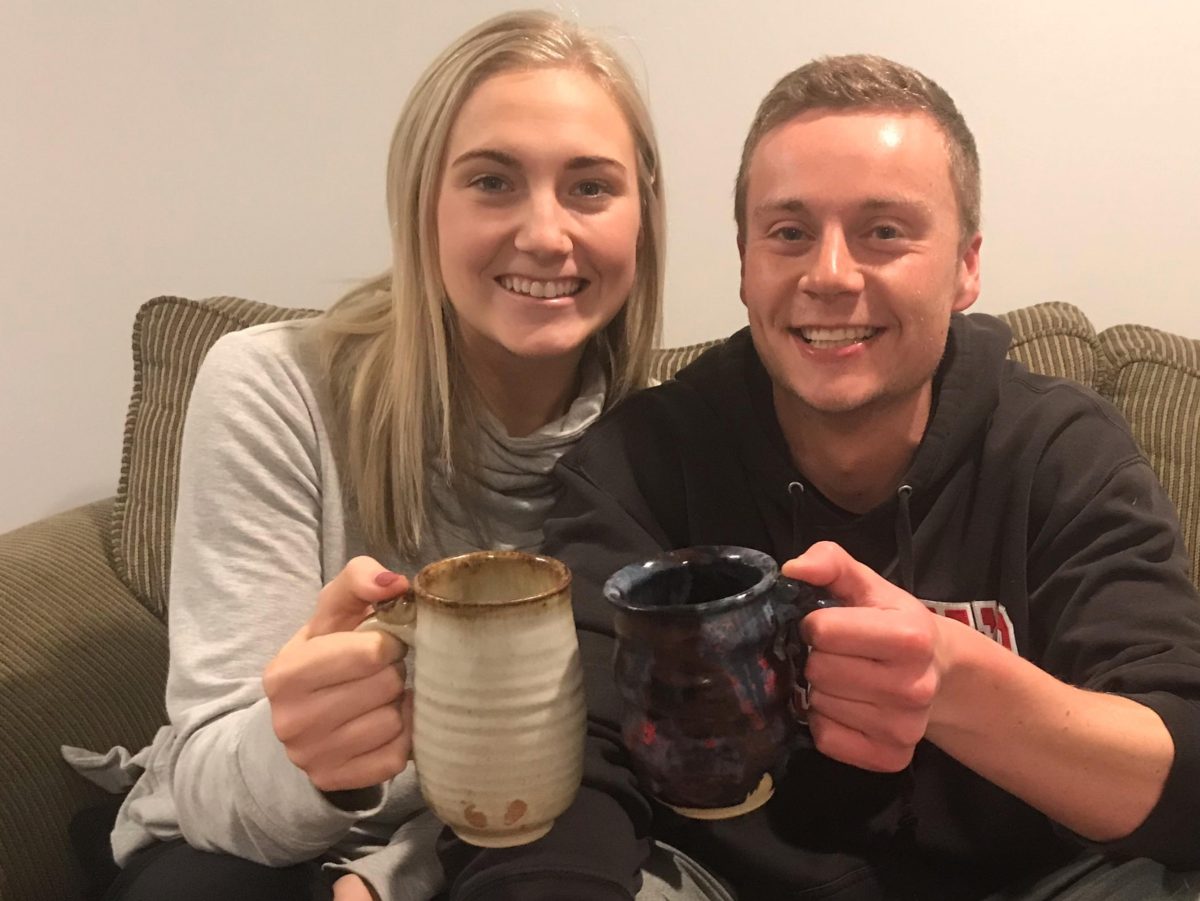 It isn’t easy to work with someone you love, but Joel was supportive of our relationship. He and Sienna work hard to do the same everyday. My time at Cherrico Pottery helped me learn that John and I could keep a balance of enjoying time together both in and out of the office.

The Next Generation of Student Works

We also got the opportunity to usher in the new helpers to the business: Avery and Aubrey. Part of my job was to train them in.

Every month, each employee (including Joel) posts a quote on the wall from the reading they did that month. This way, we can see what book everyone is reading and what resonates with them.

I think these aspects of the work are impressive because we can learn from Joel’s methods of balancing knowledge work with handcrafting art.

Now, this blog post isn’t just to inform you on how Joel started, how he does business or what his student interns do, but I really wanted to get across how thankful I am for Joel’s mentorship these past two years.

He has made a positive influence in my life while running his business full-time. I know Cherrico Pottery has big things ahead and I know the next student interns will have an influential experience, but it’s time for me to say “cya later”. The support, knowledge, and foundation you have put into my life, did not go unnoticed.

Thank you, Joel, Sienna, and fellow student workers for teaching me new things each week. I am very grateful! 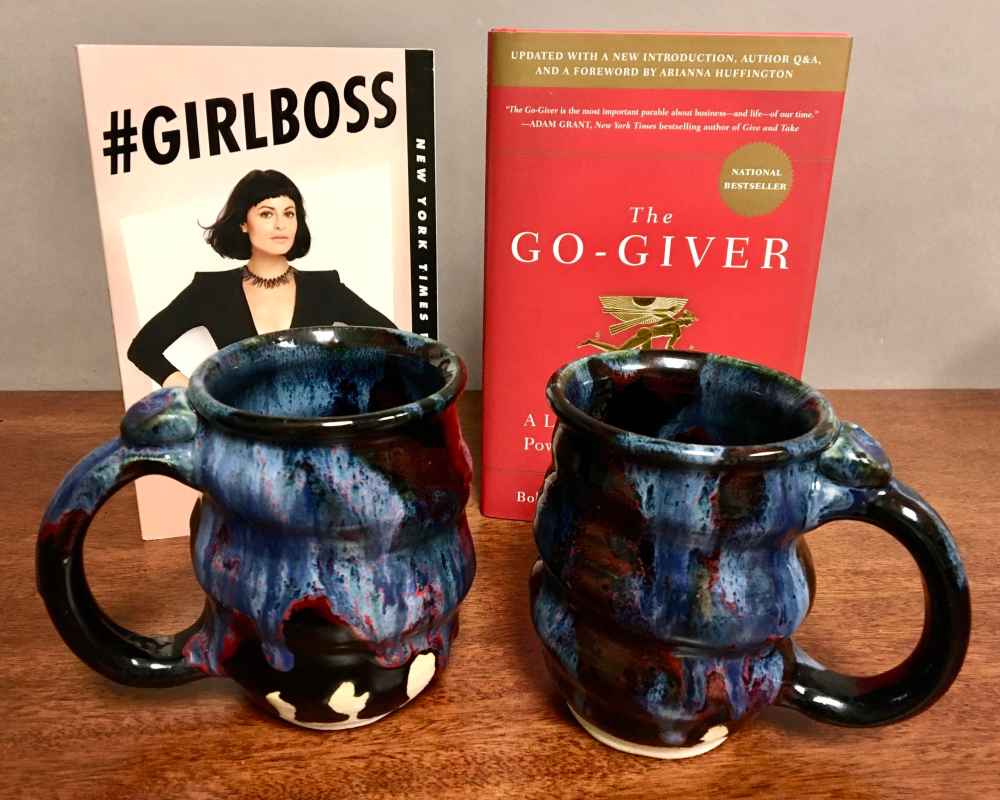 GIVEAWAY: What is one thing you have learned from Cherrico Pottery?

*GIVEAWAY ENDED 1/15/20. Winners: Michael W, Angelique L, and 1 bonus winner: Lauren T. is also receiving a Mountain Mug. Winners were email privately and notified, and their comments were responded to below.

Leave a comment on this blog post before 2pm Central Wednesday, January 15th, 2020 answering the question above (What is one thing you have learned from Cherrico Pottery?) and we will pick two people to win two free “Random Cosmic Mugs” from our back stock, each paired with two books from our “Reading and Research” shelves: #GIRLBOSS by Sophia Amoruso and The Go-Giver by Bob Burg. We’ll mail them to two of you for free (giveaway 21+ void where prohibited, no unicorns…view more detailed giveaway policy here: cherricopottery.com/giveaway-policy) winner will be chosen by Joel Cherrico and announced in the comments around Thursday). Please allow 24-48 hours max for our moderator to approve your comment

268 Replies to “Working For Artists: How Cherrico Pottery Teaches Students To Be Original”