Artists all over the world struggle to find ways to avoid attaching the word “starving” to their job title. For ceramic artists, this often means going to graduate school, becoming a professor, and building networks in academia. Recent industry polls (from the NCECA blog) show how 50% of ceramic artists are academics. Non-academics support their art by selling their wares, working part-time, and pairing with community art centers or galleries. These are all great options.

But are there ways to support art making that we haven’t yet discovered?

Our plan is to utilize the internet to face the “starving artist” fear by forging new paths that would not have been possible until recently. By trying to explore every possible connection through the internet, and then focusing on the few that succeed, we discover new ways to get pottery into people’s hands.

In case you haven’t seen the Facebook posts, Joel is giving away one Cosmic Mug each month to help spark interest in his new work. You’re reading this, which means you’re probably on the mailing list and automatically entered in the monthly random Cosmic Mug giveaway! If you’re the lucky winner, you’ll receive an e-mail asking for your address so we can ship you a free Cosmic Mug at absolutely no cost to you. And the first winner is…drumroll, please…

Subscriber #255: r********@yahoo.com YAHOOOO! CONGRATS! Thanks to everyone else who signed up! Keep your hopes up for your chance to win the next monthly Cosmic Mug giveaway, posted at the end of May. 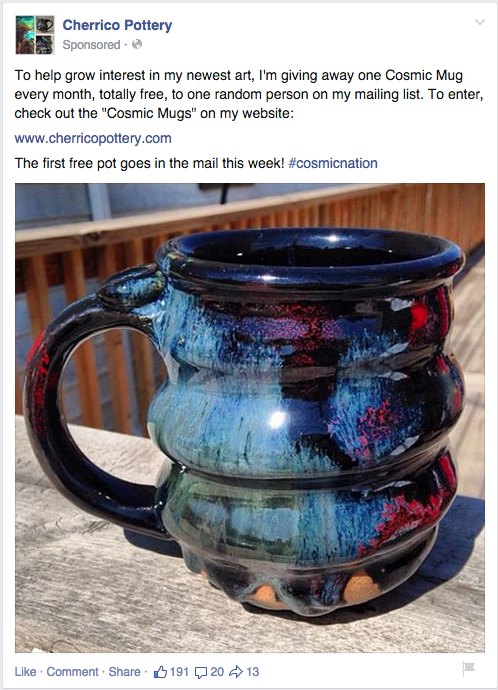 Social media sites and blogs let us creatively market pottery at extremely low costs. More popular blogs expose Cosmic Mugs to people who might never have seen them otherwise, like the Laughing Squid feature that got 1,000+ social media interactions. 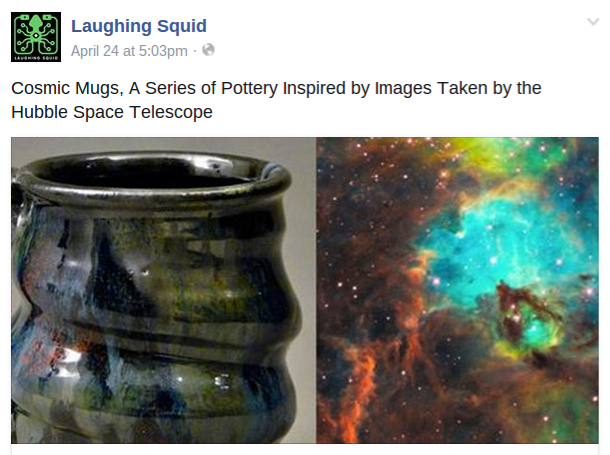 We think it would be awesome to get Cosmic Mugs featured by mainstream media, where millions of people would see what beautiful handmade ceramics look like. Talk show hosts and their guests so often drink from boring, mass-produced coffee mugs. Wouldn’t a Cosmic Mug look cooler?

The internet allows us to build a network among celebrities. A few months ago, we started communicating through Facebook to people at StarTalk Radio. Their host, Dr. Neil deGrasse Tyson, has six Cosmic Mugs in his office right now! The radio show has since evolved into a TV show, airing every Monday on National Geographic Channel. 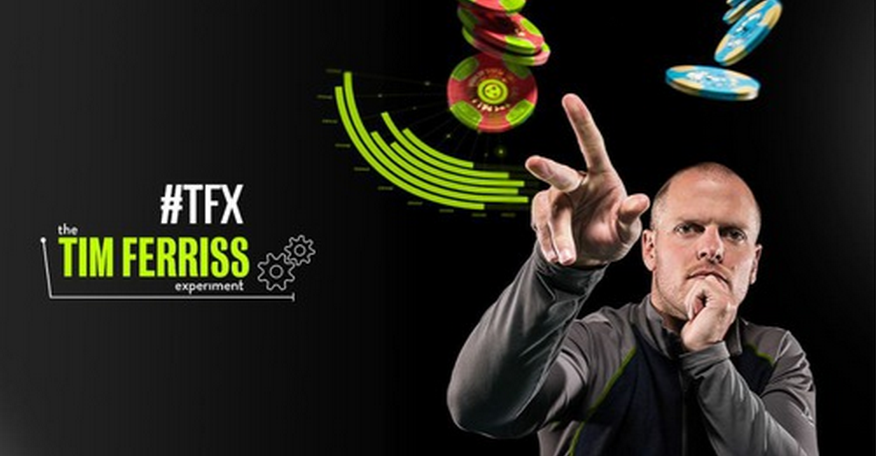 This week I am writing a letter to Bill Nye the Science Guy and sending it along with a Cosmic Mug and an issue of American Craft to the Planetary Society in California. We joined the Planetary Society, and we hope they will like the way Cosmic Mugs bring distant wonders into our hands, allowing people to experience the feeling of space. 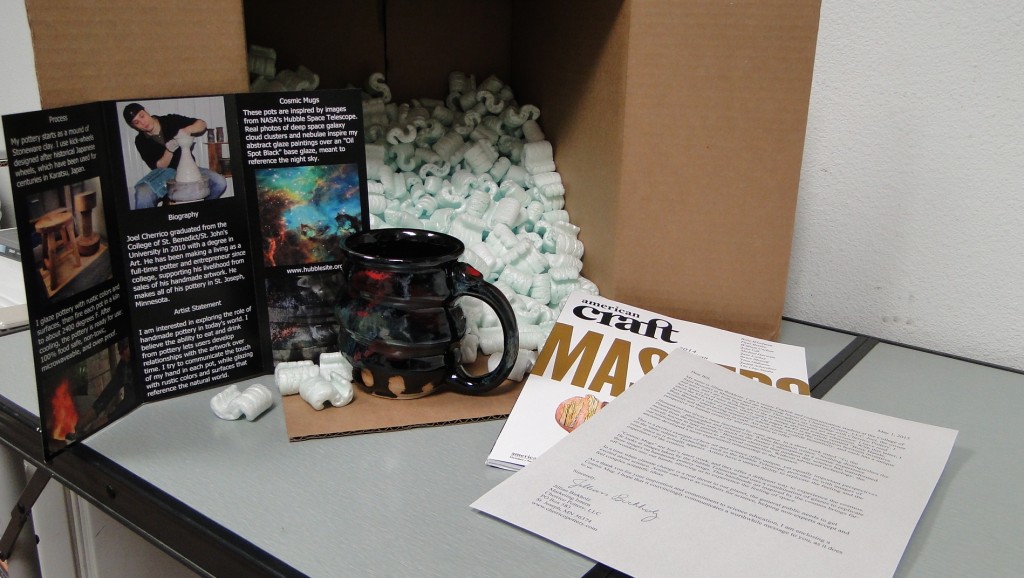 There is absolutely nothing wrong with becoming a teacher or professor to support yourself as an artist – many of Joel’s greatest inspirations are teachers (shout out to Ben Carter – innovative educator and podcaster who you pottery people will love.) But we’re devoted to exploring new ways to find success in the ceramics field by teaching indirectly. Connections that started online have already brought Joel’s pottery into the hands of over half a dozen celebrities and astronauts: Neil deGrasse Tyson, Tim Ferriss, Bryan Callen, Joe Rogan, Brendan Schaub, Buzz Aldrin, & Mike Massimino. Monday a Cosmic Mug not only goes in the mail to Bill Nye, but also to Matt Mullenweg. He created WordPress, which not only runs my website, but 23% of the entire internet!

Our global vision is to reach a tipping point that causes pottery to enter the mainstream eye. Stayed tuned…