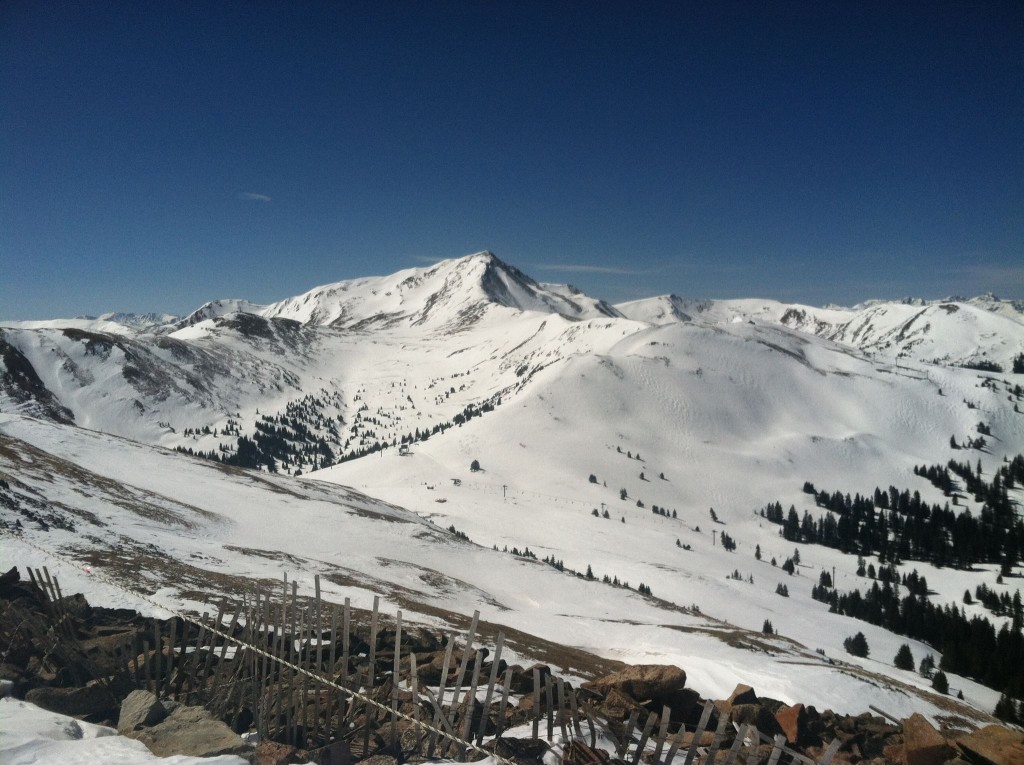 Last year for my mom’s birthday, I bought a Cherrico mug from the Minnesota Street Market in St. Joseph. She handled the mug, turning it to admire the unique aspects of the swirl and glaze. She turned the mug over to inspect the rough surface of the bottom and asked, “What’s with the dog?” I leaned over the table, first trying to see the dog that she was seeing, and then explained to her that the line drawing is Joel’s artist signature and is meant to represent a Rocky Mountain landscape. 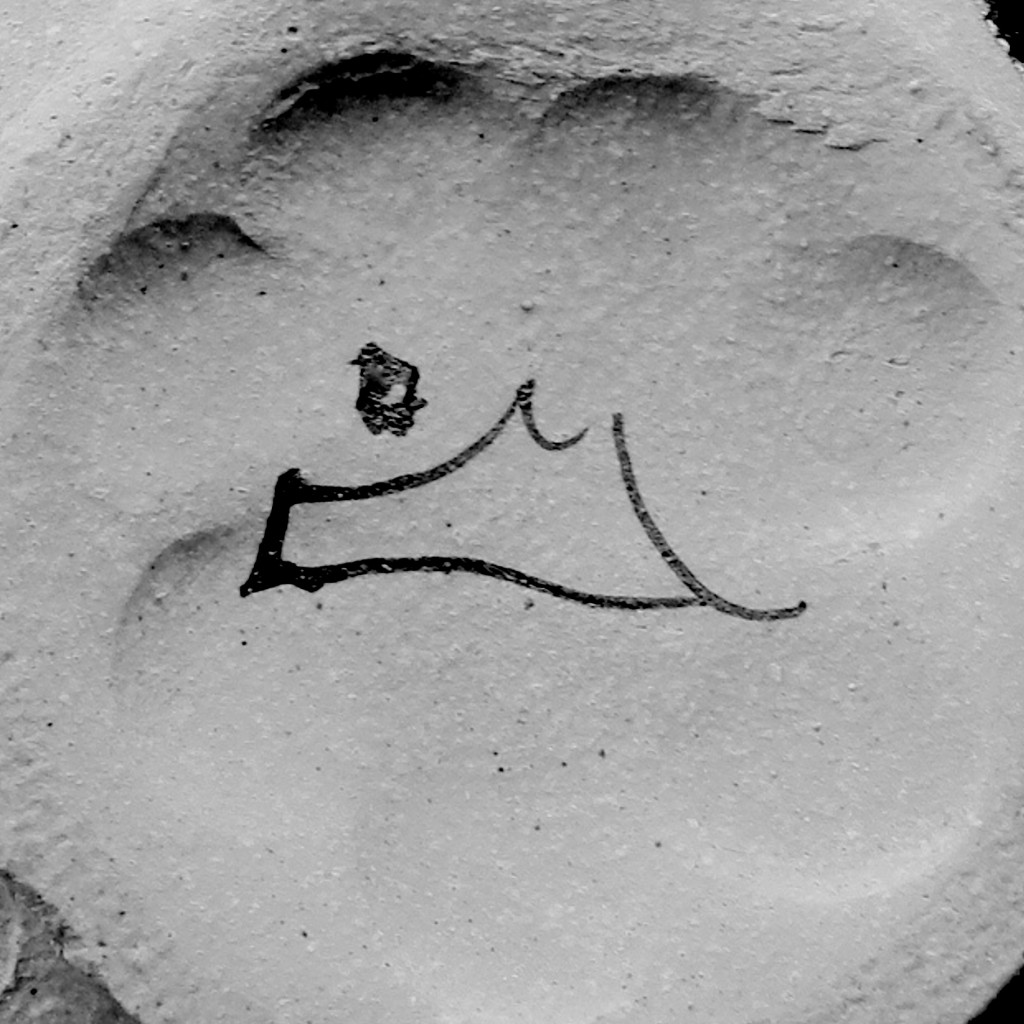 Stoneware pots are seldom glazed over the bottom; the exposed clay is called the “foot” of the pot. The clay is vitrified, meaning it’s non-absorbent, so it does not need to be glossy.

The contrast between the raw clay and the smooth glaze makes the stoneware pots more interesting and dynamic than the clean perfection of mass produced, machine made ceramics. The rough texture of the foot indicates that the pot is handmade with clay and a pottery wheel, making each pot one-of-a-kind. 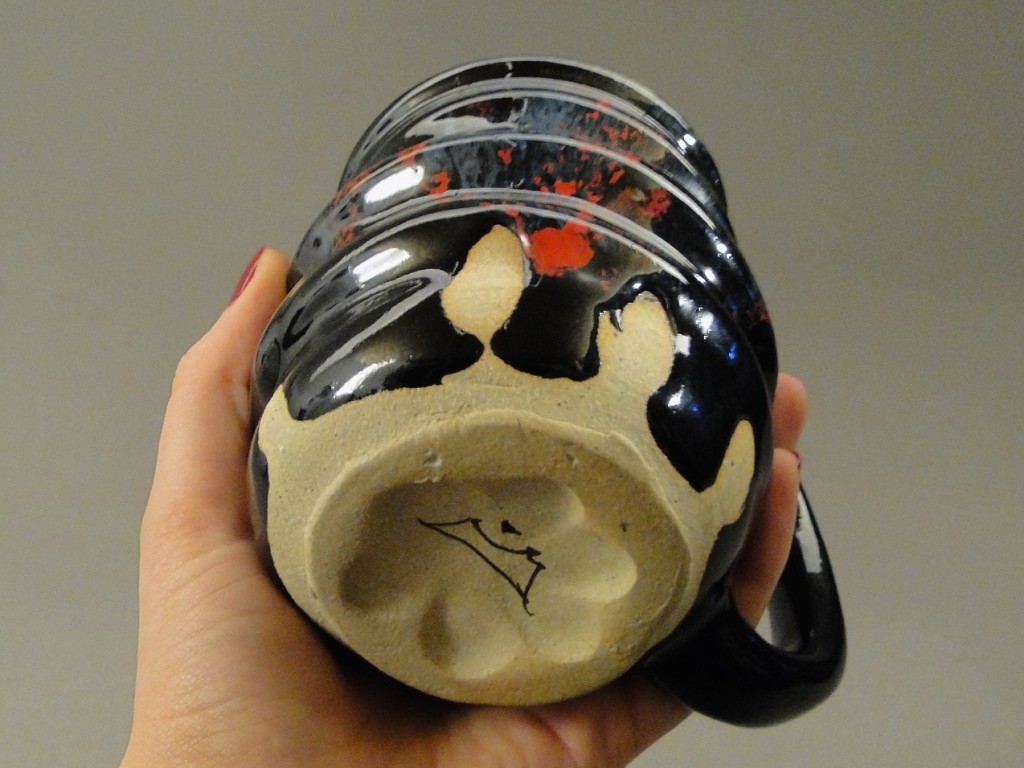 In A Potter’s Book, potter and author Bernard Leach explains how a customer familiar with pottery carefully turns the pot over to look at the foot, inspecting the clay and searching for the artist’s bona fides:

“There in the most naked but hidden part of the work he expects to come into closest touch with the character and perception of its maker.” – Bernard Leach. A Potter’s Book. Faber and Faber Ltd., 2011. Page 23.

Joel leaves his personal touch on each pot in many ways, but the unique mark of his artistry is most readily seen in the foot of the pot. At the base of his mugs and cups, you can see the fingerprints that were left when he dipped the pot into the glaze.

On the bottom of each pot is another set of fingerprints circling the signature. In fact, if you look very closely at this set of prints, you can make out the unique pattern of Joel’s fingerprints setting his identity as an artist apart from the rest. All of these marks created without any tools other than Joel’s hands communicate to the customer the quality of handmade pottery. 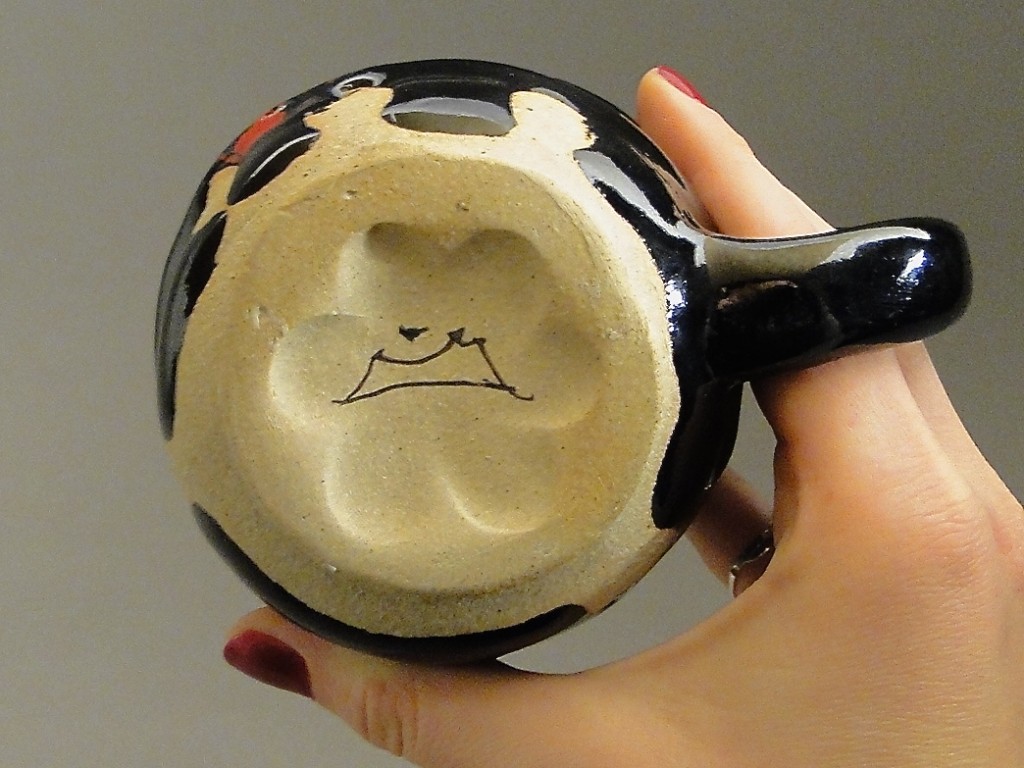 Finally, the artist signature itself which is accomplished using an iron oxide stain. The iron oxide is harvested in Spain and pulverized and sifted into a fine, red powder which Joel mixes with water to create a paint-like substance. He paints his signature during the glazing process just before the second firing.

Joel’s mountain range signature is reminiscent of Professor Sam Johnson’s, who mentored him during his time at Saint John’s University. Sam Johnson’s signature represents the flatlands of Morris, Minnesota. The similarity between the two signatures shows Joel’s artistic heritage.

You can find Sam Johnson’s work at samuel-johnson.com

Just as Sam Johnson draws inspiration from the landscape surrounding him, Joel turns to the land to find both the material and inspiration for his art. Joel was raised in the Midwest, but his family made an annual tradition of visiting the Rocky Mountains. He still tries to find time every year to visit the amazing mountain landscape.

Standing before or atop a mountain influences Joel as a person and as an artist. The magnitude of the mountains represents his own entrepreneurial and artistic ambition.

In a podcast conversation with buddhists Vince and Emily Hom, celebrity Joe Rogan describes what it is like to stand before what he considers nature’s greatest works of art:

“There’s something about mountains that is so humbling…Your daily life and troubles are balance and perspective to the images that you’re seeing of the most spectacular versions of art that nature has created. That’s what the mountains are to me…Nature’s stunning works of art.” – Buddhist Geeks. Joe Rogan, Podcast 530, 2:14:05, conversation with buddhists Vince and Emily Hom.

In Joel’s most recent work, the earth is represented in more than just the natural materials and his signature. The mountains are etched into the body of the cups and he experimented with different glazes to capture the colors of the mountains themselves, the sky, and the tree line.

Pottery is an artwork inextricably linked to nature. The clay, the raw materials used to make glazes, and even the potter himself are made up of natural elements and all are required to produce pottery. But the artist can also draw inspiration from the way Nature produces her own works of art, which are often the most beautiful.