Recently, Joel pulled a mug off the counter of the Local Blend. Its lip had chipped, and he didn’t want people drinking from it anymore. The mug was one of the earliest pieces Joel had offered the Blend three years ago. And over the course of a thousand washings, handlings, and refills, the mug had started to wear the scars of a wounded soldier. Its chapped foot was tattooed with the number sixteen marking ounces, its curves were scratched from being passed across countertops, and its insides were browned with coffee stains. Almost no part except its speckled yellow skin was in the original condition. But instead of throwing the mug away, Joel discovered beauty in its scars. Now it sits like a trophy on a shelf in his office -a proud token to the life of pottery.

Every pot tells a story. And like people, we can learn a lot about our pottery by looking at its history. One of Joel’s friends, a fellow potter named Matthew Mejia, recently shared these words of wisdom on Joel’s Facebook page. They come from the Pennsylvania potter Jack Troy. He writes, “My feeling is that we potters finish our work, but only others can complete it, through use. Pottery, therefore, is only finished once, but can be completed endlessly, by a succession of users, keeping it active in a variety of settings. When we say we are ‘moved’ by a pot, it may be the animating force of its creator refusing to be still.”

Joel tries to emulate this mindset in his pottery installations at places like the Local Blend. In one of our earliest conversations, he said to me, “Surround yourself with pottery.” When we bring pottery into our lives, we ourselves become artists. Like the mug at the Local Blend, our lives scar little memories into the artwork. A chip in the lip may remind us of a time when we tried to balance too many things at once. Coffee stains may remind us of long conversations with close friends, or perhaps, long nights and early mornings. Whatever the scars are, our pottery shares the story.

Even the best potters cannot create two completely identical pieces. Sure, a potter may make 100 or even 200 pieces of the same style, but each one has its own personality. Each pot reflects the mindset of the potter at one particular moment on the wheel. On the same shelf in Joel’s office, next to the mug from the Local Blend, sits a porcelain cup by the potter Steven Hill. Joel got this piece after Hill came to the Paramount Arts Center for a 2 day pottery workshop. What’s interesting about the cup is its imperfection. A little s-shaped scar on the inside of the cup shows that Hill speed dried it. A crack in the glaze near the foot says that Hill had to reattach the part after it fell off during glazing. Even marks in the glaze itself show that Hill may have been rushing to get the piece finished before the end of the conference. Every part of the cup feels hurried.

Hill would probably regard this cup as “flawed,” and unlike Joel, I doubt he would exhibit it on his shelf of inspiring pieces. Many potters would never exhibit or sell a flawed pot, and most usually smash them. Joel, on the other hand, appreciates these flawed pieces for the stories they tell. For him, they hold life and personality -characteristics you can’t find in a machine made, or even a beautifully glazed, flawless pot.

Many of us, myself included, may feel like we need an art degree to understand a Salvador Dali painting or a Clase Oldenburg sculpture. But with pottery I feel it’s different. With pottery, our lives become the galleries. We not only bring the beauty of the art into our lives, but our lives make the art more beautiful. Potter Dick Lehman sums it up perfectly. When it comes to appreciating our pottery he writes, “Fine dinnerware has the potential for helping us to find, even though in a small way, affection for life and beauty in living.” So, the next time life requires pottery, take a moment to study its living history.

Every little scar in our pottery shares a story. Some are pleasant, some are unpleasant, but they are all important. Joel appreciates the flaws in his pottery for the important lessons they teach him. Below are some examples of these lessons. 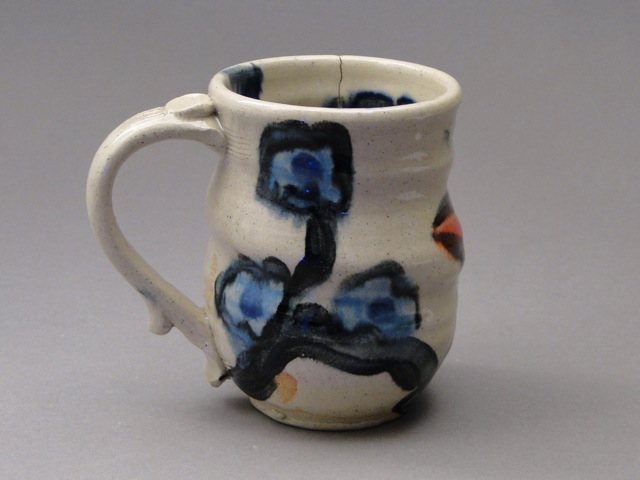 This crack comes from “dunting” – a stress crack that happens when making pottery, but opens during the firing. The pot probably got bumped in travel, since Joel often drives to and from Minneapolis to get Paige Dansinger’s paintings on his pots and exhibit them in Gallery Paige. 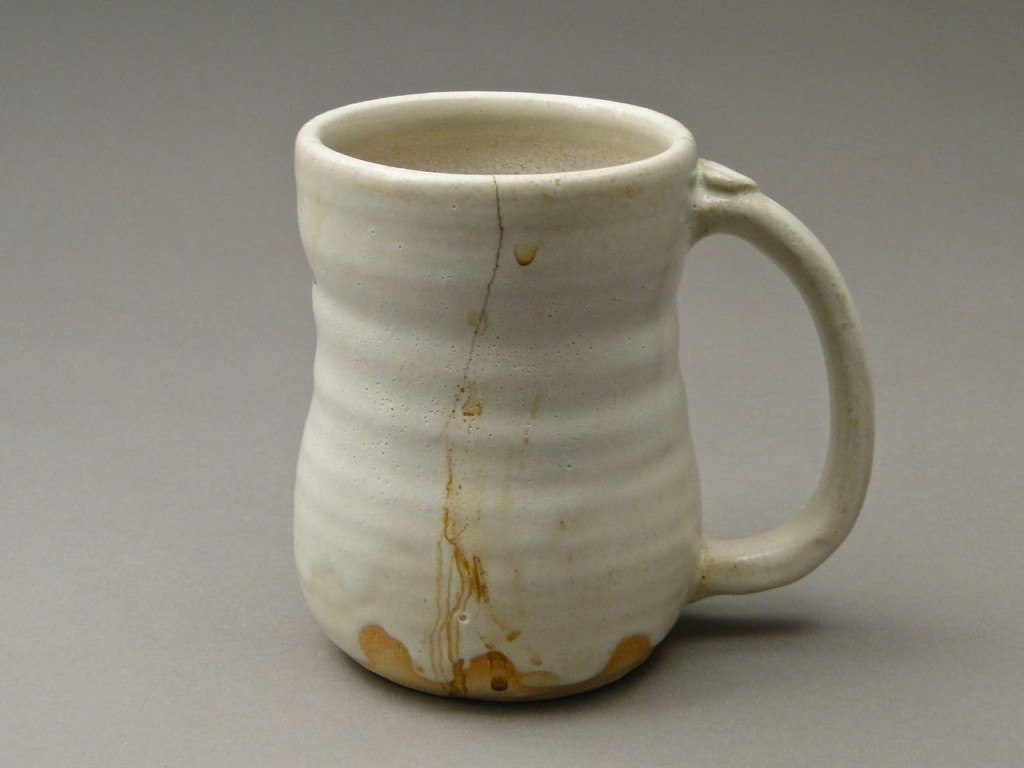 Joel uses a wood ash glaze called Nuka, which gives his pots interesting and irregular qualities like surface pinholes. Nuka stains with coffee over time, allowing the pot’s character to evolve with the user. After getting banged around for 6 months in the Local Blend, this mug cracked and leaked. Employees wash the mugs up to 5 times per day, everyday, and sometimes a mug will hold up for over 2 years. Joel pulled this one from the Blend and quickly snapped a photo of the bleeding soldier. 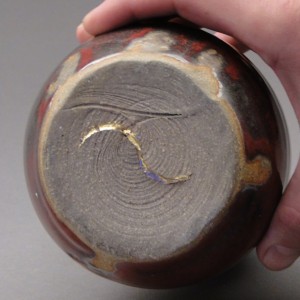 This is an “S” crack that sometimes happens with hump throwing. Joel filled it with epoxy and metal leaf. Look at the amazing color the “S” crack has next to the Copper Red glaze.

One Reply to “Live with your Pottery”