Guest Posting by my friend and writer Laura Fuller:

My sister wonders at my memory for weird details of childhood. I remember when I was four and she was seven, and Dad caught us flushing the toilet with our feet in it after 10 PM, you know, just to see.

But it’s trouble to remember what others don’t.  In my last post, I remembered that Joel and I had big plans to build a fort in third grade.  He’d forgotten this; I looked like a creep.

My Lumberjack friend drove me home sometimes when Dubai got too hot for walking. Toward June, this frequently became a ride home plus happy hour or an episode of Mad Men. I’ll remember these moments with weird clarity, for I liked them. He said something on the final ride home about the last three weeks of concentrated expriences like this – ex. college, international teaching posts – being “pregnant with meaning.” We’re purposeful on the way out the door.

Two days later, I squinted through salty contacts at my computer screen somewhere above the Atlantic, committing to language a memory from the last year:

I stood in the center of the Souq al-Arsa in Al Sharjah at noontime while the Whitneys went to see about lunch.  I stayed in the hallway, out-of-homebody and drunk on the Call to Prayer. I felt in my pocket for the Joker card I’d found in the parking lot, the first in a mysterious collection of mismatched playing cards acquired on Middle East adventures. I’d later find a seven of hearts at Wadi Damm in Oman, a queen of spades near Mt. Nebo in Jordan.

Over bottomless chicken biryani, they told me about moving abroad, how their family wasn’t too excited about it. They exchanged confident smiles. Non-English-speaking men bustled through spicy air, weaving between Lipton Tea tables.  My friend proclaimed that she would one day honor this deliciousness with a dog named Chicken Biryani. I quietly tasted the idea of living a life that scared me.

Six months later, I came back.

I wonder now whether it even happened, whether she recalls naming her imaginary dog.

It’s disappointing, moments like this disappearing from the rearview mirror, leaving me with an incomplete hand of foreign cards from a deck of memories too specific to mention. No one will draw the Queen of Biryani, the Ace of Al Sharjah.

Joel invited me to write about Abstract Expressionism.

Championing this movement in a previous post, “ROCK! Music that makes the wheel go round,” Joel said, “With Abstract Expressionism, you go with the flow and surrender to the process.” This school of art heavily influenced his piece “Mindscape” and the work he recently showed at St. Cloud’s Paramount Arts Center for his FROM THE BASEMENT exhibition.  In particular, his work reflects his admiration for Jackson Pollock. Joel says, “I’m thinking about the innovative ways he used paint to bring out the essence of the material. Each hanging sculpture reminds me of one of Pollock’s drips.”

To help me understand what that means, Joel passed along a Youtube clip of Pollock discussing the activity of art-making:

“When I am painting,” Pollock says, “I have a general notion as to what I am about…There is no accident, just as there is no beginning and no end.”   He is as much a part of the art as the paint or the canvas. He doesn’t say he knows what the painting is about, but what he is about. Surrendering to the moment, Pollock says, “Sometimes I lose the painting, but I have no fear of changes, of destroying the image. Because the painting has a life of its own, I try to let it live.” He can be a part of the creative moment without deciding how it will turn out.

The Metropolitan Museum of Art’s crash course in Abstract Expressionism helped, too, for I knew nothing of this stuff until challenged to write about it. The Met’s Stella Paul uses language similar to Joel’s in boiling down the movement. Abstract Expressionists, she says, “accorded the highest importance to process.”  As I understand it, then, the moments spent in creating the thing are more important than the thing itself. The piece of art is only that—a piece, an artifact of the more-important creative moment.

Paul quotes the 1952 writing of critic Harold Rosenberg, who considers a piece of Abstract Expressionist art “not a picture but an event.” We call it a painting, after all, not a painted.

His very blog is evidence of Joel’s Abstract Expressionist tendencies.  Sure, it’s nice if you like his work, but he cares deeply about how it’s made, what materials go into it, what music he hears while he’s working.  All of the variables in his creative moments add to the eventual thing. If you were there while he was working, you’d be in it, too.

In his novel Bluebeard, Kurt Vonnegut writes as a fictional character named Rabo Karabekian, a retired former Abstract Expressionist painter whose paintings no longer exist. They destroyed themselves because of the materials he used, leaving nothing but the memory of their creative moments.

Rabo explains why even before his work was lost, he couldn’t compare to the real masters of Abstract Expressionism.  He failed to paint time in motion: “life, by definition, is never still,” he tells us. “Where is it going? From birth to death with no stops on the way.” He calls it a “miracle…which was achieved by the best of the Abstract Expressionists,” that for their work to be great, “birth and death are always there.” The moment accounts for its own changing place in time.

There’s solace in knowing that to Abstract Expressionists, the creative moment is the art.  For better or worse, time travels, and we have no choice but to go with it or risk missing new moments.

But if we spend our moments in a way that respects their quick passing–creating something, collecting cards– that is, if the thing you’re doing qualifies as art in and of its active self, you can remember that art when you look back, stoneware vase or abandoned playing card in hand. The magic is in the moment, and the moment moves.

Joel: “So Don, when do you know when to stop working on a piece?”

Don: “When someone hits me over the head with a baseball bat.” 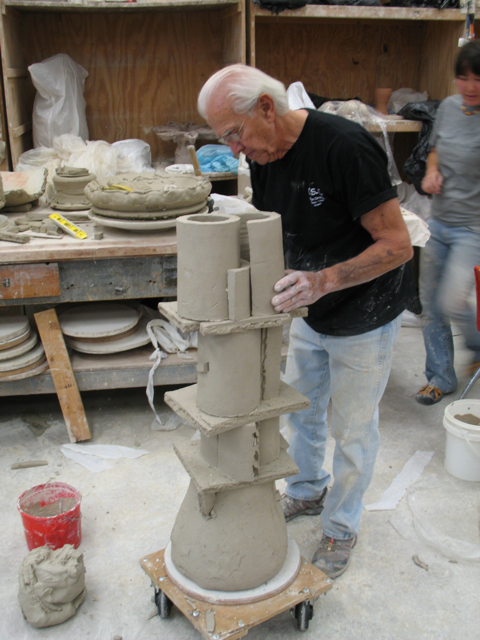