I’m not Joel, but in third grade, we spent Mrs. Sullivan’s class scheming on the fort we wanted to construct around our desks.  Joel doesn’t remember or deny this, but he does confirm that he had a “fort phase.” Naturally I now write about his pottery.

I’ll teach six more weeks in Dubai, UAE, which is ultimately an airport:  Being unsafe takes effort, you can get what you need but with preservatives, and jewels and gadgets of all countries attempt to constitute a style of one’s own.  If flying through O’Hare is not visiting Chicago, being in Dubai isn’t the definitive Middle Eastern experience.

I can’t curse it, though. Safety, convenience, dreamy beaches, solid job, and good friends — not torture. And there are little glimpses of an older-than-me culture here if I bother to look.  You can hear the call to prayer from five mosques at once at Kite Beach.  Graffiti and Iranian merchant ships frequent the creek in Diera.

But these joys are fleeting, up against the cranes, malls, Maseratis and TGIFridays.  It’s mostly contrived to look Arabian. Give the people what they want: stucco, marble, huge doorways–literal smoke and mirrors.  Look at our fancy Arabian-esque mall! It’s just like Arabia, but big! And with retail! It’s like Arabian retail Inception!

People list Dubai’s location as a reason to stay here. “Well, it’s just so easy to travel from here.” The place’s value is attributed to the ease with which residents can escape it? Huh.

But it’s true. I hopped to Jordan for spring break this year to reorganize my self. I traveled with a kind family of hippies and a lumberjack, the best travel crew I’ve ever known.

Jordan is even more Westerner-friendly than Dubai but doesn’t abandon its culture to be this way.  Like a family dinner instead of a fancy restaurant meal, Jordan offers what it has instead of what it thinks you want: its own food, open air markets, monolingual Arabic signage, and even locals who groom their own facial hair.

The whole week gave off an aroma of chance as we took in seemingly private moments, decidedly uncontrived.  I felt snug and small as I watched them, un-special myself but privileged to see something special, like a rare phenomenon of nature. 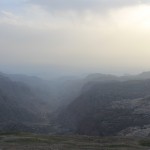 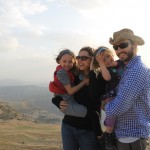 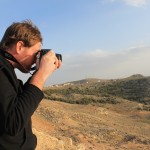 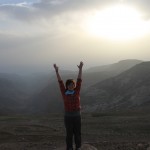 We took a scenic route and would fall short of Petra by sunset.  Hani, driver and guide, consoled us with an iPod adaptor cord.  Banjos and guitars and wailing harmonies crowded into all the van’s empty spaces, and we howled out open windows as the afternoon began to droop. At sunset, we unloaded on the side of the road.  A fresh wind bloomed from a vast gorge.  The sun resolved down in the valley and a mist settled below.  Our hair swirled in the continuous gust, and we laughed our exhilaration, maybe at the implied joke of possibly passing that moment anywhere else. The unexpected wind swept upward, not threatening to knock us into the gorge but to blast us far from it — Southeast Asia, New York, Seattle. We threw our arms wide to catch air that was left off our itinerary. 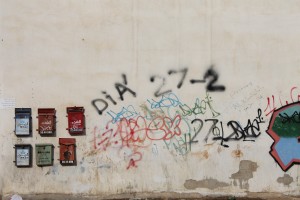 I slept with my windows open in Petra.  At 4:30 AM I popped awake, panicked by the bullhorn fervor of a grown man hollering at full voice. I laid back down and let the loud, emphatic call to prayer steamroll into the room.  The snoring cut out abruptly from the next bed, startled into a hush. If he was awake he didn’t say anything.  Neither of us rose to shut the window. The curtains undulated with the breeze, giving the illusion that the invitation to prayer was a physical thing, one that could move fabric and make noise and feel cold. I smiled, flat on my back, that someone’s job was to wake us up to be grateful. It would have happened without me. The call would have sounded and Petra’s men would have walked to the mosque with their prayer mats even if I had slept in my Dubai bed.

The philosophy bit carries a sense of participation in a community or cycle. His ashes come from a family in Collegeville, MN, who heat their home with a wood burning stove. This wood is entirely deadfall or dying trees, which the family harvests from the St. John’s Arboretum. The ashes then are “an expression of the landscape,” he says. They reflect the types of trees from which they come and where those trees grew.

But wood ashes are harder to work with. It takes “dozens of hours” to sift through them and special glaze chemistry to mix custom glazes, which are ever-changing: “When the ashes change from year to year, so must my glaze recipes. Pine ashes differ from Oak, Walnut, etc.” The trees don’t really care that Joel has a glaze to make.  They live and die on tree watches, and the Nuka glaze takes from them what it can get. The pots that use this glaze are simply reflections of the small moments that Joel catches — a season heavy with pine or oak, a stop on the side of a Jordanian mountain.  Things happen, and sometimes we’re both lucky enough to see them and crafty enough to capture them. 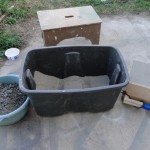 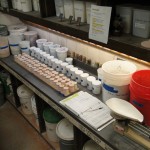 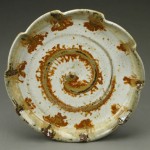 The second bit is the aesthetics.  Joel says of his ashes, “I’m curious how this earthen material often creates an earthen aesthetic.” He points to “complex glaze surfaces, rustic tones, natural color variation, spots, drips, asymmetrical patterns that” remind him of “colors and surfaces in nature.”

He appreciates the unpredictability and experimentalism of every firing when he uses these materials, especially when he incorporates iron, which reacts with the ashes to create dark contrast. The more labor-intensive and unruly work is rewarding.

He boils it down to this: “Constant challenge helps the artwork learn and grow.” I like the idea that the art itself is being challenged, that art learns. I like even more that he goes looking for this challenge because art’s learning is a worthy pursuit. 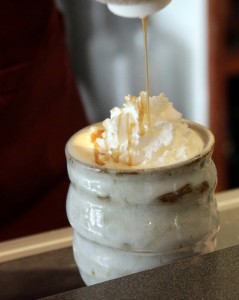 It’s a human tendency to tuck that learning into a classroom, a box, or a fail-proof glaze formula to use for all time:  This is how we learn about culture. This is how we make the Nuka glaze. But it’s not that simple, and that’s why it’s so valuable.  The end product is at the mercy of all the calls to prayer and winds from Jordanian valleys and fallen Minnesota branches from any family of trees — nothing we can plan or reign over. And the statement that forms won’t ever be said that way again, not for us and not for as long as we live, which makes that mug seem like quite a privilege for your coffee refill, no?