One year ago today, I published a blog post titled, “Where Will You Be One Year From Today?” This was my goal:

I failed. I still live in the same tiny apartment that I lived in while writing “A Potter’s Journey” years ago, and I work in the same dirty, old studio. The pottery is fired with 100% of whatever fuel is generated by the electric company.

It’s not the first time I’ve failed so publicly…far from it. You can read all about my most gut-wrenching failures in this American Craft Council blog series, “A Potter’s Journey.”

But having BIG dreams, even when you might fail, fuels innovation. Today is also the 2 year anniversary of the time I set the Guinness World Records™ title for ‘most pots thrown in one hour by an individual.’

Most of the World Record Pottery Planters have been given away, purchased by people globally and opened remarkable new doors to new fans and celebrities alike. It almost didn’t happen, because I threw my back out practicing, which can be a serious problem for potters. Pushing through that failure led to achieving the ridiculous goal of actually braking the record- on a kick-wheel, for the first time in history!

“If you set your goals ridiculously high and it’s a failure, you will fail above everyone else’s success.”

This doesn’t mean you should let your ego run wild, trying to be better than everyone. It means that audacious goals will bring you to EPIC new heights, even if it’s not the heights you expected. You, and everyone around you, will achieve what you never thought was possible.

I might live in a tiny apartment, with the same dirty, old studio, but that apartment is shared with the love of my life. We’ve already drawn a floor plan for the studio we hope to build together and we’re saving money. We’re also setting more audacious goals and feeding inspiration into our artistic careers, like this trip to NYC to meet Neil deGrasse Tyson at the StarTalk Radio Patreon Party….

…or our annual trip to the Rocky Mountains to escape the madness of modern life for a short time, to relax in the vast mountainous landscape. 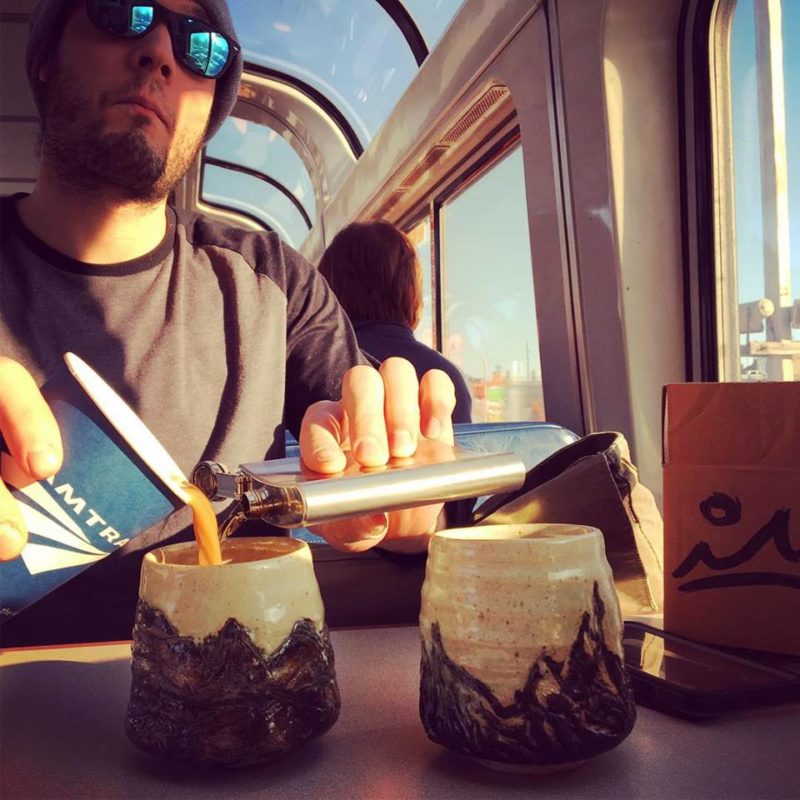 Even little actions, like this technique I developed to reduce cracking in my “hump thrown” pottery, can have profound long-term effects. I use this technique every time I throw pottery, and millions of people have been captivated by it.

The American Craft Council and I created a relationship through a series of blog post and interviews, but now it’s time for us to keep doing whatever work is required to grow a strong, thriving craft community for all of us. That’s why I signed up to exhibit “Big Pots” and new sculptural art at their ACC St. Paul Show this year. 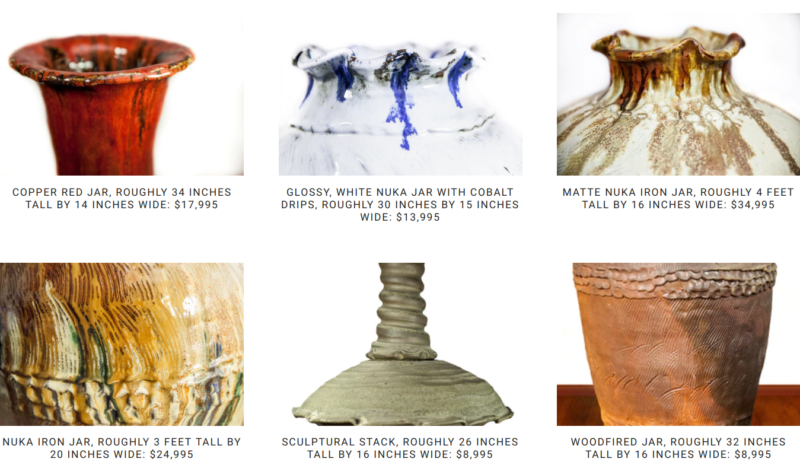 cherricopottery.com/awards was designed solely for this reason, also sponsored by the American Craft Council. 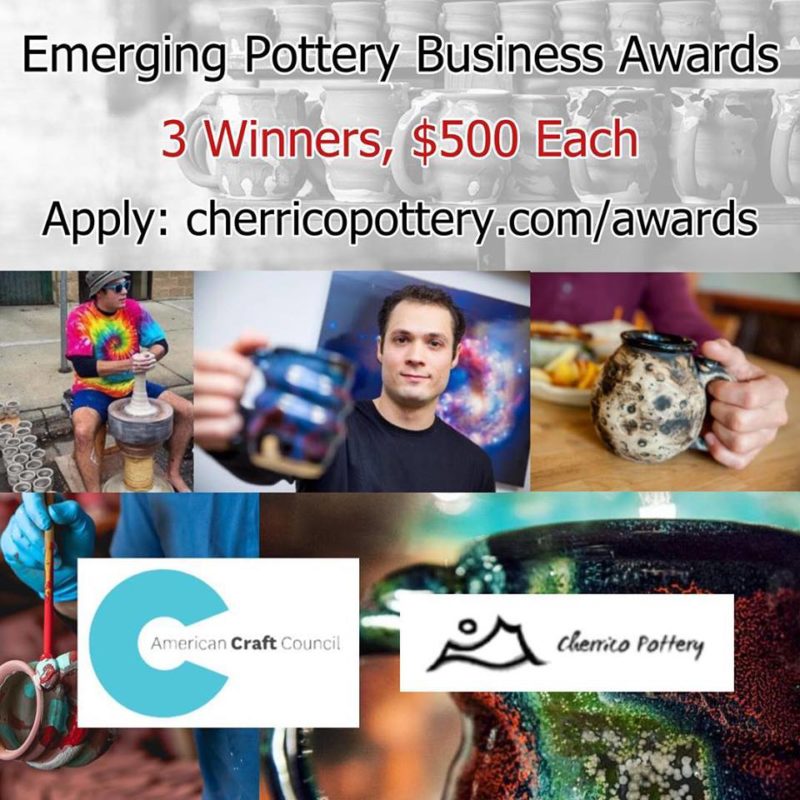 Do you want to see Cherrico Pottery in person, alongside hundreds of professional artists? April 20-22nd we’re setting up at the ACC St. Paul Show in Minneapolis exhibiting a selection of Big Pots, Cosmic Mugs and performing Live demos. Hope to see you there! 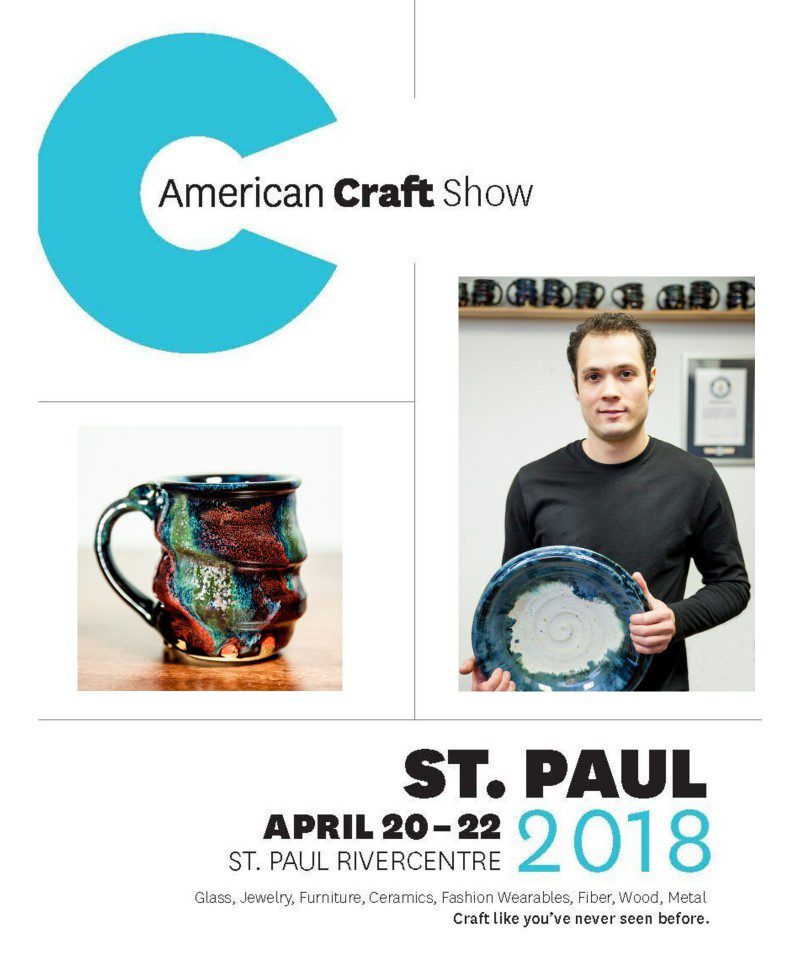 Two Sides of the Same Coin

Neil deGrasse Tyson is an astrophysicist known for his ability to integrate science into mainstream pop culture. He is the director of the Hayden Planetarium in New York City, hosts and operates the television and radio show StarTalk, is the author of 13 books, and has 9.8 million Twitter followers. He’s an accomplished man, to say the least.

Cherrico Pottery has long been fans of Dr. Tyson’s work, specifically because he sees the value in art. He says artistic expression and scientific discovery cultivate the same emotions. It’s both a scientist’s and artist’s job to communicate the awe, splendor, and the beauty of the world around us. Dr. Tyson says that one large difference between art and science is that if a scientist doesn’t discover something in the universe, someone else will. Art, on the other hand, is something different:

“In the arts, what you create, no one who was ever born before you or will be born after you from your death onwards, will ever compose exactly the same thing you did.”

Our friends at StarTalk created a video with a few reasons for why it’s important to continue art education. Dr. Tyson is an expert in the sciences, but he understands that in order to succeed and grow in scientific knowledge, you must have certain skills that aren’t always taught in science classes.

One of these skills that overlap between art and science is creativity. Dr. Tyson points out in this video that the human mind is capable of both precision and creativity. The best scientists are creative and the best artists bring some rationality and order into their artwork. What makes Joel’s Cosmic Mugs so spectacular is because he has integrated both creativity and order into each mug. The cosmic glaze on each mug is not meant to depict the cosmos, but instead, express it.

When Dr. Tyson speaks about the topic of art and science, there’s a good chance he brings up Vincent van Gogh’s famous painting, Starry Night. He often says that it’s the first painting that didn’t reflect reality, but instead emotion. He says that art and science are the two of the few things we create that will last past our lifetime. 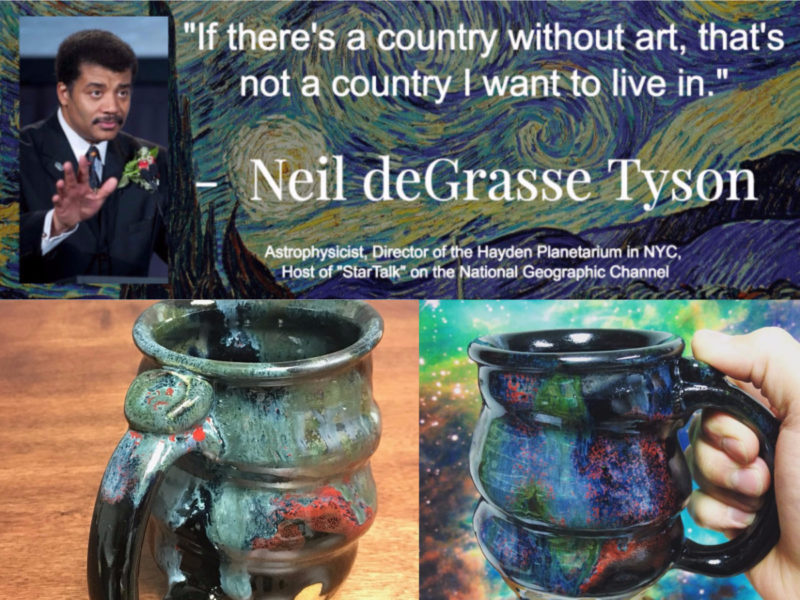 Joel has gifted Dr. Tyson and the team at StarTalk a few different mugs throughout the years to show his support. Dr. Tyson personally owns a Moon Mug and a Cosmic Mug. Joel also supports StarTalk radio and podcasts by donating to them through Patreon. Joel even sometimes wears a StarTalk shirt in his Facebook live videos. Inspired by StarTalk’s Patreon, Joel recently has launched his own Patreon. It’s a way for fans of Cherrico Pottery to get more content. Don’t worry though, Joel will still be active on Facebook, including his live videos. 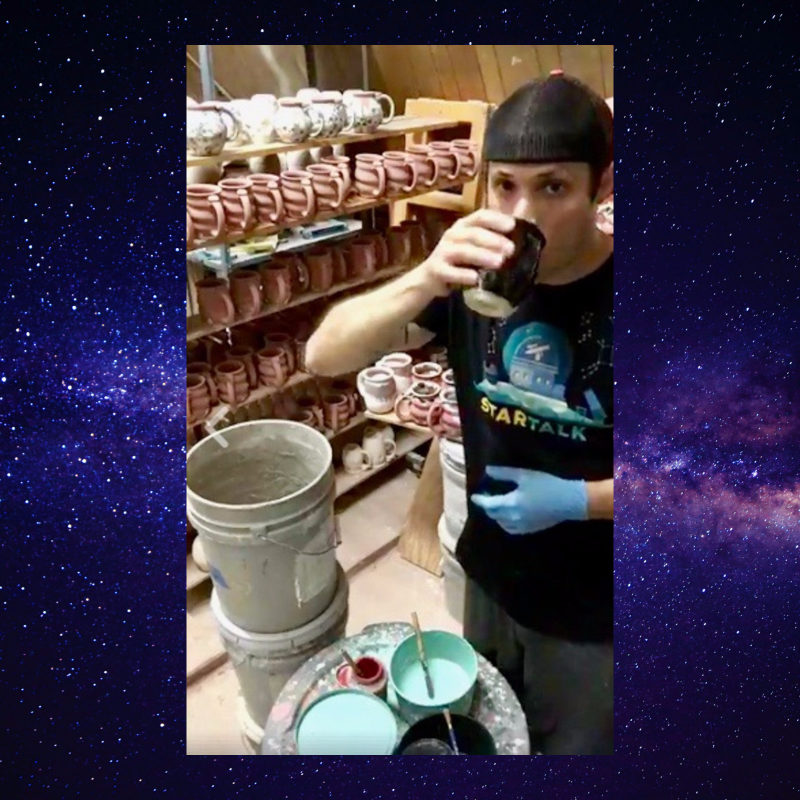 Halloween might be every child’s favorite holiday, and Dr. Tyson was no different. Maybe it was a sign of his future career when his favorite candy bars were Milly Ways and Mars Bars.

Thanks so much for reading this far. Please feel free to enter this giveaway, in celebration of Halloween. 4 winners: 3 of Joel’s best Cosmic Mugs, and 1 Signed Copy of ”Ceramics TECHNICAL” that published about Joel’s Cosmic Mugs.

What is Asteroid Day?

We decided not to wish you a “Happy Asteroid Day!” because it’s not really a celebratory day. It’s an international day for the science community to educate and raise awareness on the seriousness of asteroid collisions with Earth. June 30th was chosen to be International Asteroid Day for a reason.

Referred to as the “Tunguska Event,” an asteroid exploded over a Siberian forest causing mass devastation. It was a mystery to natives for decades on what caused this explosion, until scientists stepped in. It’s the largest impact event on Earth ever recorded during human history.

“You kind of want to know how to move asteroids around – that’s a good thing to be able to do, because one day we’re going to find one with our name on it.”

Our friends at StarTalk created a video with some of the best reasons for why it’s important to care about asteroid research. Dr. Tyson is an important science communicator, but he also has a soft spot for art (shown by The Starry Night painting reproduction hanging in his office or the Copper Red Mug that snuck into this interview):

Here at Cherrico Pottery, we donate regularly to The Planetary Society as members and periodically for additional research and understanding of asteroids. You can hear straight from them about the importance of asteroid defense in this video they launched today:

We also donate to The B612 Foundation, which is an organization that helps protect Earth from asteroid impacts. We would prefer to not end up like earlier Earth inhabitants, especially since, “It is a statistical certainty that one day the Earth will get hit by a large asteroid.”

Joel Cherrico used inspiration from the cosmos to create amazingly unique Meteorite Mugs. Joel actually models all his Meteorite Mugs after the meteorite named The Willamette Meteorite, located in the American Museum of Natural History.

Here’s your chance to purchase a Meteorite Mug and donate to Asteroid Research and Defense. 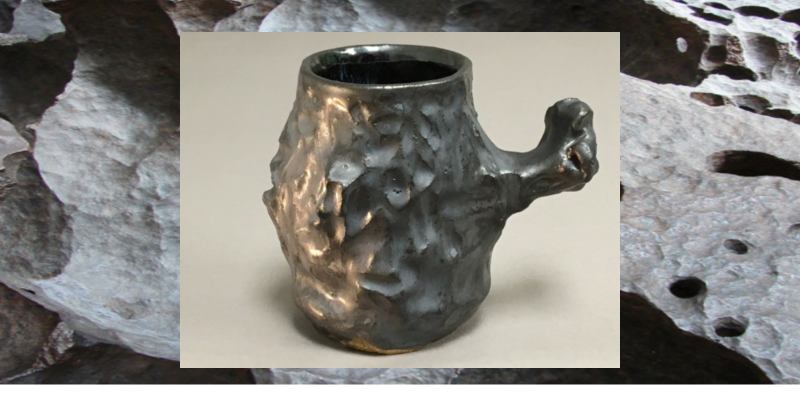 –  Set of 4 “Cosmic Shot Cups” going out to 2 different winners: 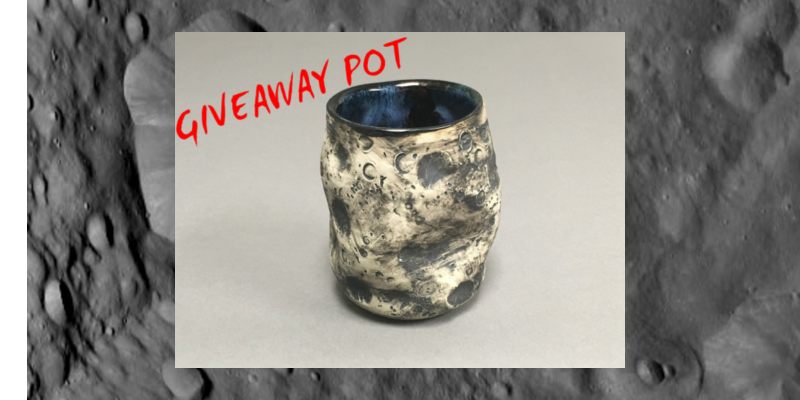 You can win this free Asteroid Cup and a set of these Cosmic Shot Cups in honor of Asteroid Day. Simply answer the question below in our comments to enter:

How has science impacted your life?

Leave a comment below before Friday 7/7 telling us how scientific classes, scientific discoveries, or science in general has impacted your life. We’ll pick the best 3 comments and give the winners this Asteroid Cup and 2 sets of shot cups, totally free!

To enter, you must leave one, genuine comment, or the moderator will not approve your comment or include you in the giveaway. Please use your PERSONAL name or initials and not your business name, as the latter comes off like spam. Please allow 24-48 hours for your comment to appear. You must also be on our email newsletter distribution list to qualify, so please make sure you are okay with receiving our email newsletter before you leave a comment. We will pick winners Friday around 2pm Central and you will receive the pottery shipped to you nearly anywhere globally, totally free. *ENDED: Congrats to our winners Nancy, Valerie, and Lou. Thanks so much to everyone for participating!