This is the sixth post in a series entitled, “A Potter’s Journey” for American Craft Council’s website. This post tells the story of growing my pottery business into a profitable livelihood: 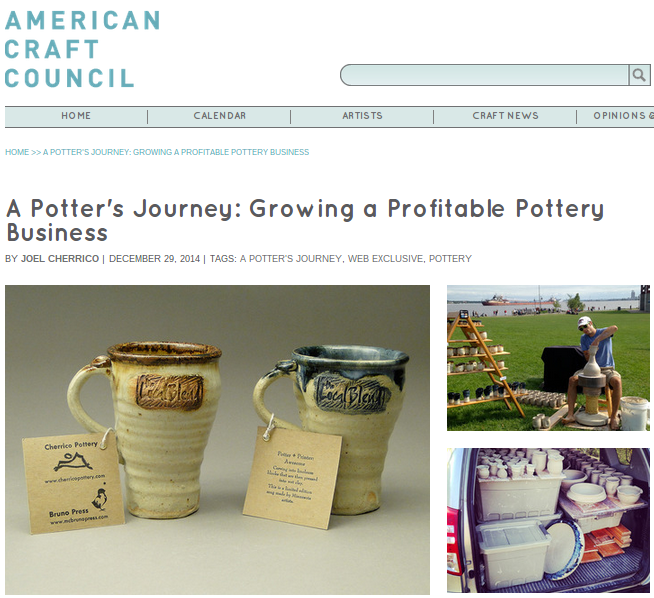 This is the third in a series of blog posts titled, “A Potter’s Journey.” American Craft Council and I have been working together for the past year, devising the best way to share the story of how I developed a full-time pottery career. I hope you will enjoy reading these monthly blog posts as I share my experiences with a new audience. 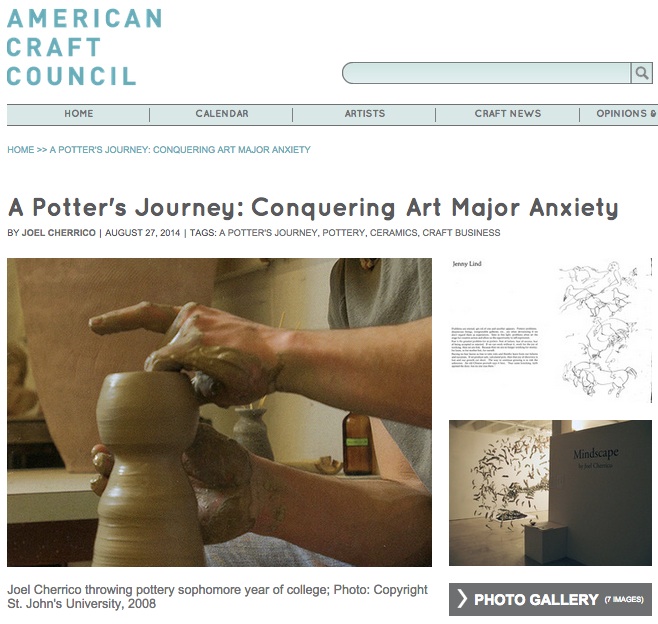 This is the second in a series of blog posts titled, “A Potter’s Journey.” American Craft Council and I have been working together for the past year, devising the best way to share the story of how I developed a full-time pottery career. I hope you will enjoy reading these monthly blog posts as I share my experiences with a new audience.

“A Potter’s Journey: Art Experiences Outside the College Classroom” 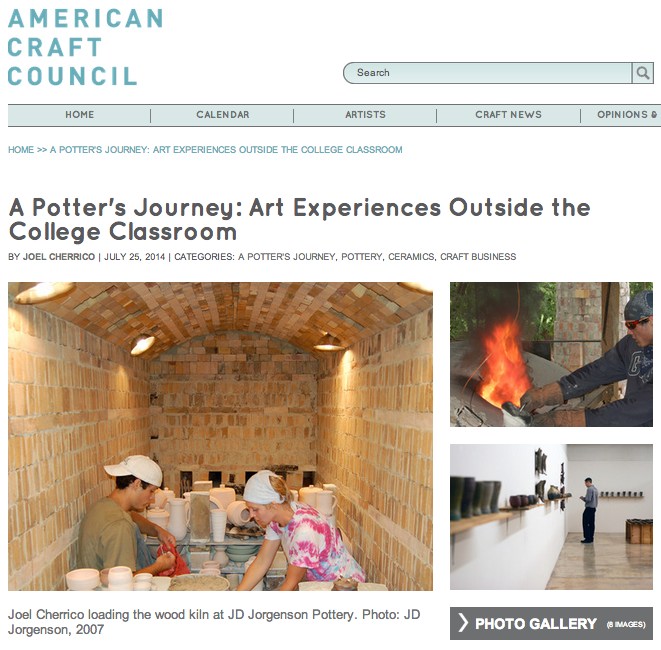 When Joel went to see Bill Gossman at a small pottery workshop in New London, the time-tested artist wedged, centered, and threw 25-50lb. blocks of clay at a time. These blocks, impressive in themselves, soon became massive 3-4ft. jugs that Gossman needed to finish in multiple sections. If you have ever thrown pottery or seen somebody throw pottery, then you’ll understand the effort Gossman needed just to raise that amount of clay once. He did it three times per jug.

As someone who’s only thrown about ten functional mugs in his life, potters like Gossman amaze me. They possess an unparalleled dedication to their craft. And like any professional athlete, these guys will often spend years practicing and perfecting their work before they receive any recognition.

Consider someone like Don Reitz for example. When Joel went to see the 84 year old potter at a 2009 workshop in Flagstaff, AZ, Reitz started working before anyone else in the morning and stayed well over an hour late each night. In only 2 days, Reitz went through 2 wheelbarrows full of clay! These pictures show only a small sample of Reitz’s work, but listen to him discuss it here for the full story.

Warning -it gets emotional. 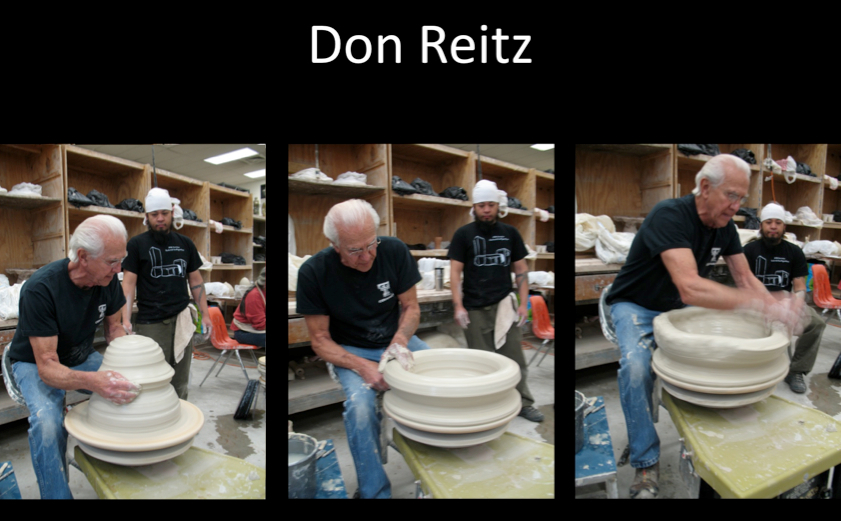 Years after the conference, Joel contacted Reitz. This workshop directly led to Joel’s creation of Mindscape, and Joel wanted to connect with Reitz by sending him a cup or two as a thanks. Still humble after years at the wheel, Reitz wrote back saying, “A cup is not necessary, I’m just happy to know that my work is appreciated. Also, watch the movie The World’s Fastest Indian. Rent it or whatever. It’s about TOTAL COMMITMENT.” 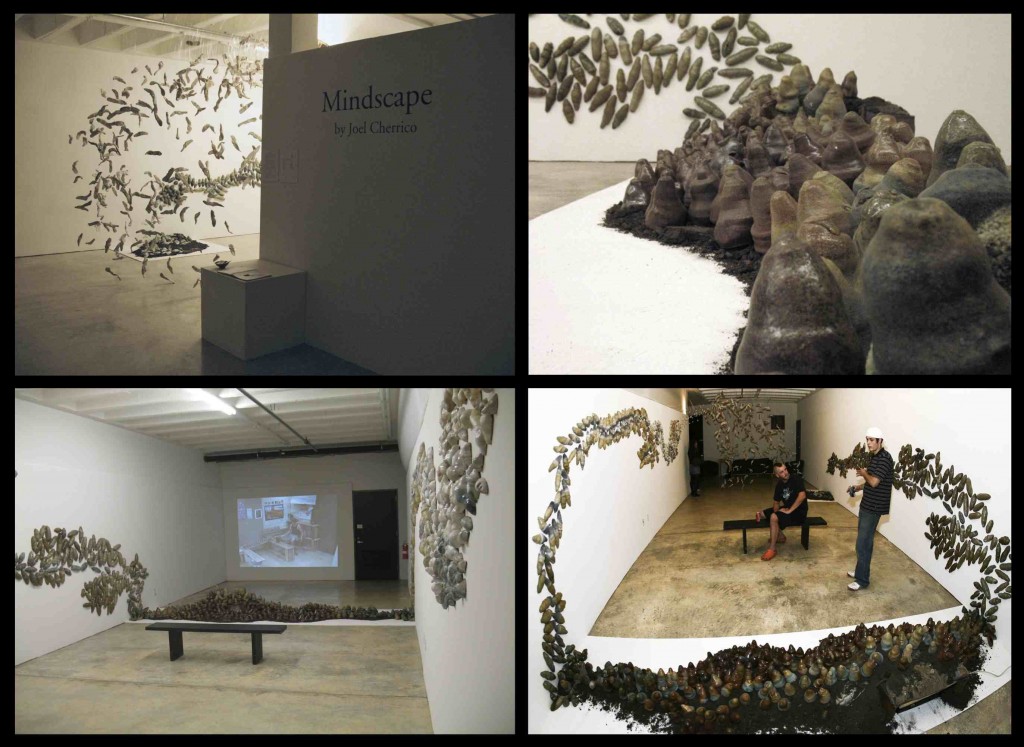 As spectators to art, we only see the final product. We never see the hours of studio-time behind the world’s fastest motorcycle or even a massive clay sculpture. We see the game, but we don’t see the practice. What I’ve learned from hearing the stories of people like Gossman, Reitz, and Joel is that to make beautiful pieces of art, a potter needs to balance inspiration with dedication. Like Reitz says, he needs TOTAL COMMITMENT by immersing himself in the clay.

Michael Cardew was a historically famous potter that lived a tough life partly by choice and also by circumstance. While in Africa, he made pottery in places where water was so scarce, he had to use caustic wood ashes to make clay more plastic. Joel often looks at Cardew’s biography when he needs motivation, especially in the more difficult times of his career. Here’s a quote from the book that I feel speaks well to Joel’s pottery. Joel first heard it from his friend and author Ken Ferber. It says:

“…a good design in pottery is the product of a tension or ‘dialect’ between the demands of pure utility and those of pure beauty, and only a long experience and continual struggle enables you to achieve a successful fusion of the two.”

The biography goes on to describe Cardew as a potter with “athleticism” and his work with clay as, “direct, physical and urgent.” I think you could prescribe the same qualities to almost any professional potter, especially guys like Gossman and Reitz who continue to make massive ceramic pieces throughout the second half of their career. These guys are making a statement through their effort. And in many ways, their art then becomes the direct expression of this effort. 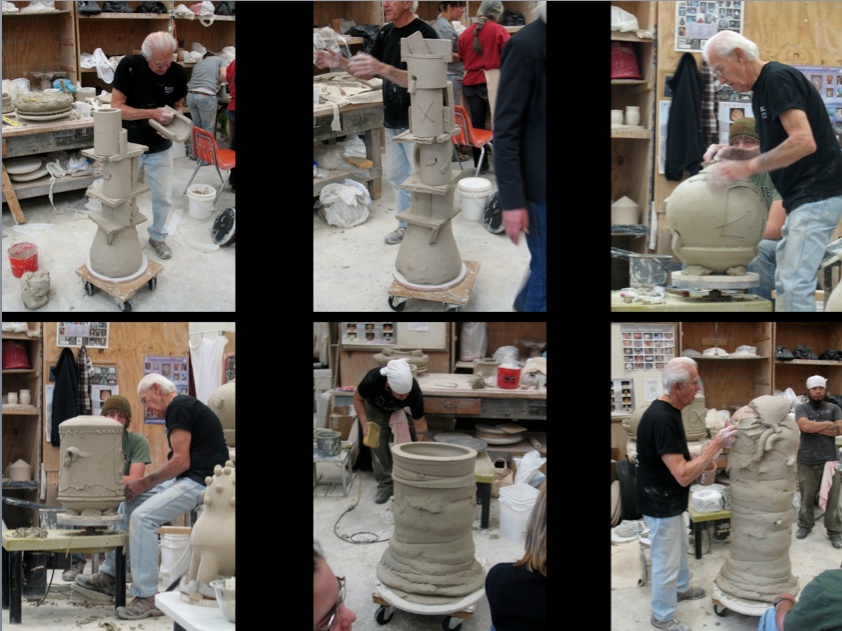 A lot of this philosophy parallels the Abstract Expressionist school of thought which was made popular by artists like Jackson Pollack and Peter Voulkos. Joel himself draws heavily from the abstract expressionists. He feels abstract expressionism has the potential to foster a healthy lifestyle through clay. Mindscape was Joel’s first experiment with abstract expressionism, but even with his functional pottery or hump throwing demonstrations, he likes the almost unconscious movement of working through 50lbs. of clay spinning on the wheel. For him, clay becomes an expression that’s at every moment “direct, physical, and urgent.” 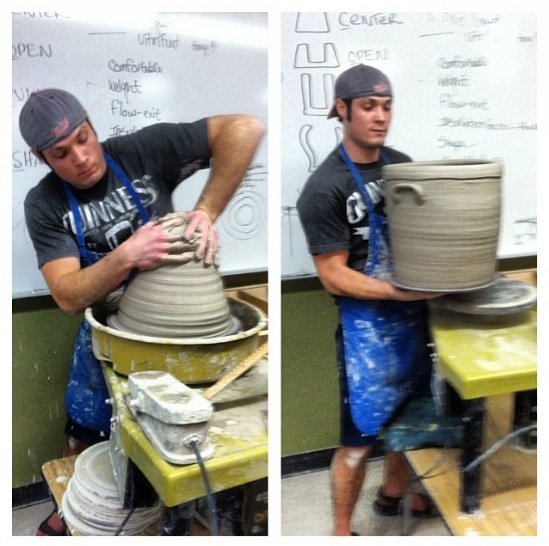 Last week I was throwing some dinner plates and I noticed a really cool texture as I was carving clay away from the wheel. The images below show how I start my 12” dinner plates by throwing a wide cylinder. I cut clay away with my wood knife before folding the lip down into a plate. While carving the clay away, I noticed an interesting squiggly coil.  I kept all of these funky clay coils and assembled them into snail sculptures.

I added a rolled up coil of clay to the backs of these slugs, turning them into snails. I try to use a spiral texture on every piece of my pottery and most of my sculptures.  I like using this texture that occurs so often in nature because it helps relate my clay pieces to the natural world. Clay is harvest from nature, so I like to communicate this in my work. Spirals are found in the natural world as infinite shapes and sizes. Similarly, every one of my pots has qualities that set it apart from the rest. Even when I make plates over and over, no two plates will ever be exactly the same.

These pieces were also inspired by my visit to the Redwood Nation Forrest – totally overrun with Banana Slugs and snails.

[wppa type=”slideonly” album=”3″][/wppa]
These taller sculptures shown below were also made on the pottery wheel, thrown in separate sections then attached. I want my sculptures to give the illusion that they grew from the ground. They remind me of rainforest mushrooms or plants. I’m having trouble coming up with names for these types of sculptures. Any suggestions?