*This is a guest blog post, edited by Joel Cherrico and written by Macy Kelly: CSB/SJU Marketing Intern at Cherrico Pottery. In this post, Macy addresses fan questions from Cherrico Pottery Facebook Live videos about why Joel uses traditional kick-wheels instead of electric, motorized wheels like most potters.

You may be wondering why Joel Cherrico kicks his pottery wheel around and around, instead of simply pressing a motorized pedal and letting the wheel do the work. He learned to make pottery on an electric wheel in high school and understands that it might be easier, faster and less stress on the body, but he chooses otherwise.

There’s more to art than the end product.

All Cherrico Pottery is crafted on two different types of kick wheels: the Karatsu-style wheel and the York wheel. Both have advantages and disadvantages, like portability and weight, that are taken into consideration before any clay is “thrown” (the term “throwing pottery” comes from the Old English word, “thrawan” meaning to twist or turn.)

The Karatsu kick wheel was handmade by a local woodworker who used wood from a local Maple tree. Sanded, finished wood is beautiful, which is often why Joel decides to perform his pottery craft on this wheel. The bench was made from White Cedar from the Minnesota North Shore. 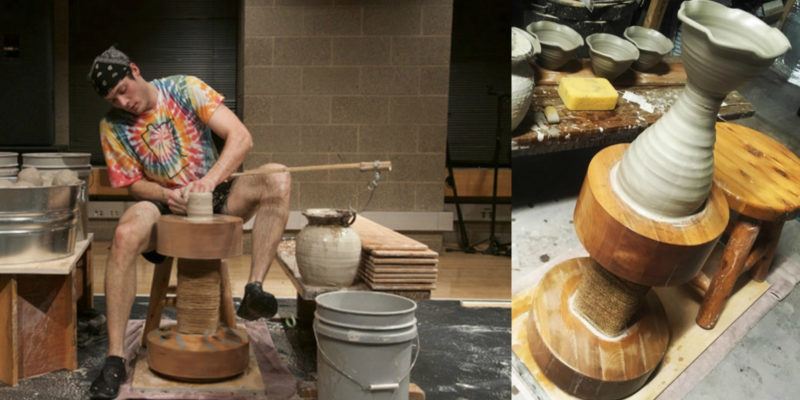 Joel bought his 20-year-old Karatsu wheel used, after working as a production thrower at Prairie Fire Pottery in 2014. After two weeks working at Prairie Fire Pottery, the studio generously paid him enough money to return home with profit to purchase the Karatsu wheel from his former pottery mentor Sam Johnson. The wheel was built to last a lifetime.

When Joel broke the Guinness World Records title for “most pots thrown in one hour by an individual” the Karatsu kick wheel was a key factor. Previous potters who attempted the record all used electric wheels, and the previous record holder used an electric wheel to throw 150 pots in one hour. You can watch Joel set the new record on his Karatsu-style wheel here, breaking the previous record by nine pots.

Unlike electric wheels, you can’t just crank the motor and power through the clay. It takes training, balance and a deep understanding of how to throw pottery while kicking at the same time. Artistry and athleticism are equally important. 40 pounds is extremely light for a pottery wheel, so there is no momentum to keep the wheel spinning unless it is constantly kicked. You can learn how Joel used meditation and intense physical training to accomplish this epic feat.

The wheel is so lightweight that it must be anchored to a board, held in place by the potter’s body. Downward force makes the potter and the wheel joined in the act of throwing.

Karatsu wheels are rare. It’s tough to buy or find one anywhere. You can learn how they’re made by reading “Body of Clay, Soul of Fire” or finding a local wood worker who might be able to craft a replica. You might even be able to reach out to the St. John’s Pottery directly and respectfully inquire about the process of learning how to use and obtain one of these rare wheels, which were originally brought to the Minnesota area by renowned potter Richard Bresnahan.

This awesome YouTube video shows an artist crafting an Onggi kick wheel, which is a type of precursor to the Karatsu wheel. Onggi wheels have been used for centuries for larger pottery, generally over three feet tall. There are similarities between the two, but both are hard to find for purchase. Any talented crafts person could design and create a gorgeous, functional Karatsu or Onggi-style kick wheel.

The second wheel used to craft Cherrico Pottery is the York kick wheel, shown below. It’s only about 16 inches tall, made from a cement mold around metal bearings. To raise the wheel to a proper throwing height, Joel crafted a Black Walnut top with White Oak risers, which are secured to the wheel like a pottery bat. The 24 inch height helps improve throwing posture, since older potters commonly struggle with back pain from bending over low wheels for decades.

The York weighs around 80 pounds, which is twice as much as the 40 pound Karatsu, but it’s actually more portable. It sits on three steel feet, so it does not need to be bolted down. It can be picked up, moved anywhere and taken apart in two pieces. Easy assembly and light weight make it extremely portable, compared to commonly used Lockerbie kick wheels weighing around 300 pounds each.

The York wheel has been great for performing pottery demonstrations all across the Midwest. In 2013, Joel used it up to five times weekly at local farmers’ markets and art festivals (left photo) and he brings it to Duluth Art in Bayfront Park in front of Lake Superior once annually (right photo). 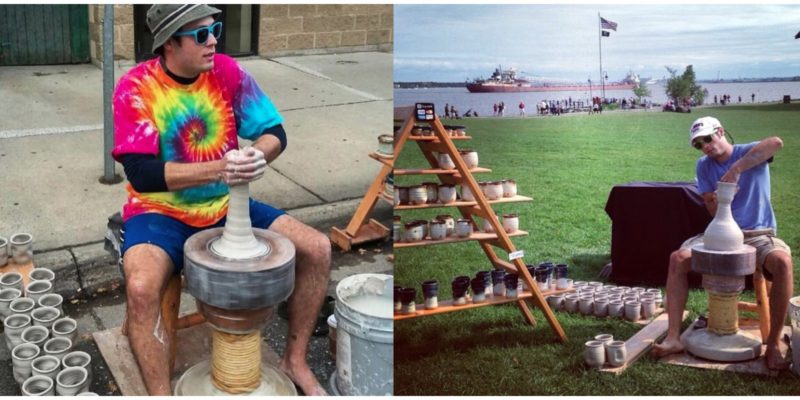 It was created by Roger York in 2008. Joel purchased it from Mr. York during his sophomore year in college, after they spoke on the phone a few times about Mr. York’s career as a potter and his decision to make wheels. The wheel took him four months to craft and he only charged $250. He was 87 years old. Mr. York published the patent online here for free and you might be able to find one on craigslist someday. If you find one available, please email us here: contact@cherricopottery.com. Most people don’t know how to use this wheel and would gladly sell it for cheap. Joel was recently gifted a second York wheel for free, so he can put it to good use.

The York wheel is considered the “work horse” of Cherrico Pottery because of how this durable tool can travel easily. Rope is wrapped around Joel’s wheel because he used it so much that the thin middle piece (shown below) began to crack. The middle, cement section was wrapped with an entire roll of duck tape for strength, followed by rope for aesthetics.

Both Karatsu and York kick wheels are currently used to create all Cherrico Pottery. Next time you see Joel spinning pottery live on the Cherrico Pottery Facebook page, try and guess which kick wheel he is using.

If you are looking for a simple, easy wheel for learning pottery, Joel recommends the Brent electric wheel. It’s affordable and practical for beginners and advanced potters. High school Joel actually made his first pots on a Brent in 2005. He used the same style of Brent to create a 400+ pound planter in under 5 hours back in 2012. 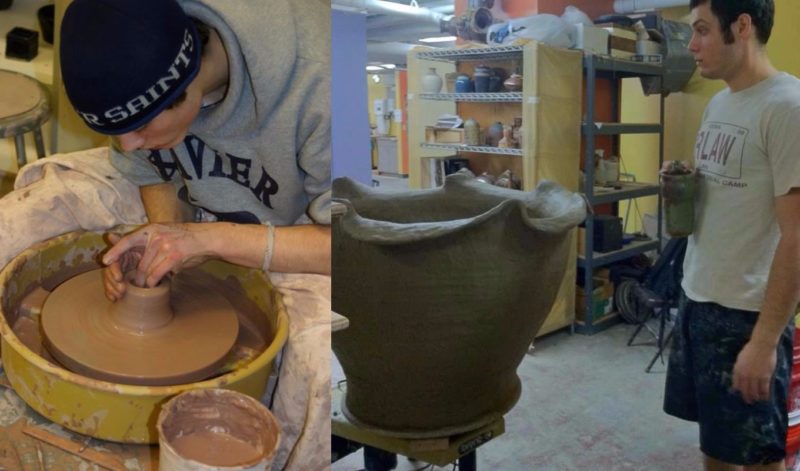 Renowned potter/sculptor Don Reitz used Brent wheels to make his signature Abstract Expressionist clay works. Reitz powered through hundreds of pounds of clay with ease. Joel captured Reitz throwing two wheelbarrows of clay in two days during a workshop in Arizona titled, “Potters as Sculptors, Sculptors as Potters.” You can learn about Joel’s direct experience learning from Don Reitz in his American Craft Council Authorship here or view the artwork that Joel created since soaking up inspiration from Reitz in the BIG pots section of the Cherrico Pottery store.

What is one thing that you have learned from watching Joel throw pottery on his kick wheels in his YouTube or Facebook videos? Share your newly acquired art knowledge in the comment section below. 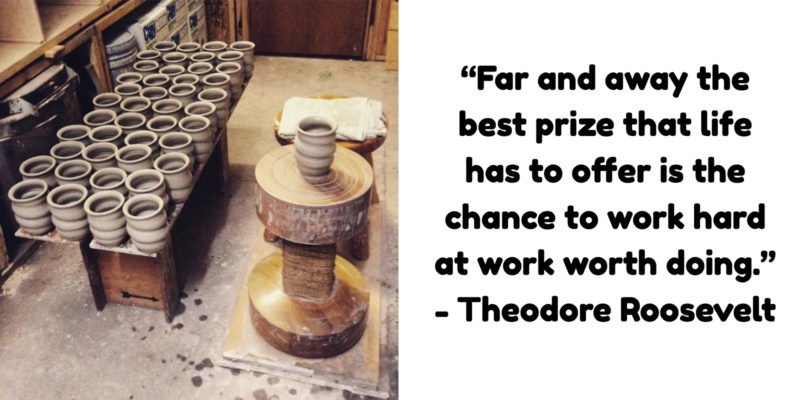 Thanks so much for reading this post and for following Cherrico Pottery. Please subscribe to our email newsletter here and leave a comment below before this Friday telling us one thing you have learned about Joel’s pottery or Cherrico Pottery in general. Joel will pick the best comment about the best lesson one person has learned, and pick them to receive one free Cosmic Mug. To enter, you must leave one, genuine comment about something you have actually learned from us, or the moderator will not approve your comment and include you in the giveaway. Please use your PERSONAL name or initials and not your business name, as the latter comes off like spam. Please allow 24-48 hours for your comment to appear. You must also be on the newsletter distribution list to qualify. Joel will pick one winner Friday around 6pm Central to get one of our best Cosmic Mugs, totally free. Thanks!